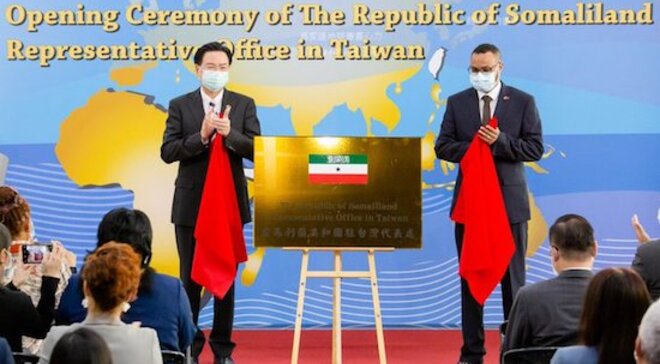 MOGADISHU, Somalia - Somaliland unveiled an official liaison office in Taiwan on Wednesday, a move which further bolsters her efforts to be recognized internationally, over three decades after declaring self-independence from Somalia, which has fairly struggled to establish a functional government within the same period.

The region seceded from Somalia in 1991 after decades of repressive rule of military leader Siad Barre, who was dethroned following a military coup. Throughout Barre's regime, Somaliland accused Mogadishu of masterminding genocide in the north, which left thousands dead.

Initially, Somaliland had gained independence from Britain in 1960 but opted to team up with Somalia days later, which had been under the Italians. The amalgamation of the two states brought about the Republic of Somalia, which effectively disintegrated in 1991.

And to boost her chances for international recognition, Somaliland has stepped up the efforts, setting a representative office in Taiwan, and East Asia island which is also being claimed by China. On Wednesday, Somaliland unveiled the offices in Taipei, amid growing pressure from both Mogadishu and Beijing.

Hagi Mohamoud, the official representative of Somaliland to Taiwan, graced the ceremony which was attended by senior government officials from Taipei administration. The island was represented by Joseph Wu, who is the minister for foreign affairs.

"The Republic of Somaliland has officially opened its Representative Office in Taiwan," said Mohamoud, who was recently appointed to represent Somaliland by President Muse Bihi Abdi, the leader of the northern breakaway region of Somalia, which is keen to get full recognition.

On Twitter, Taiwan Ministry of Foreign Affairs recognized the new milestone by the two states, in a statement where President Muse Bihi Abdi was hailed for his steadfast leadership. The ministry said the office will help boost bilateral ties between the two states.

"Minister Wu wrote a new chapter in history at the Sept. 9 opening of The Republic of Somaliland Representative Office in Taiwan. Our heartiest congratulations to Muse Bihi, Hagi Mohamoud, and Mohamed Hagi for helping make possible this momentous moment in bilateral ties," Taiwan said.

Last month, China raised a red flag over the ties between the two states, a move that caused ripples in Somalia. In a tough-worded statement, Somalia had termed the decision as "violation of our territorial integrity" but the statement was blasted by Hargeisa, which maintained that it had nothing to do with the South.

In July, the US which has been at loggerheads with Beijing welcomed the cooperation between Somaliland and Taiwan. Before Wednesday's function, Wu and Mohamoud held a meeting at the Ministry of Foreign Affairs on Tuesday, where they finalized plans to open the offices.

In recent weeks, Somaliland has been a center of international interest, something that could as well bolster efforts for international recognition. For instance, there are reports that Kenya, which sits at the United Nations Security Council [UNSC] and which has borne the brunt of Al-Shabaab raids, is discussing the possibility of pushing for Somaliland's statehood quest.