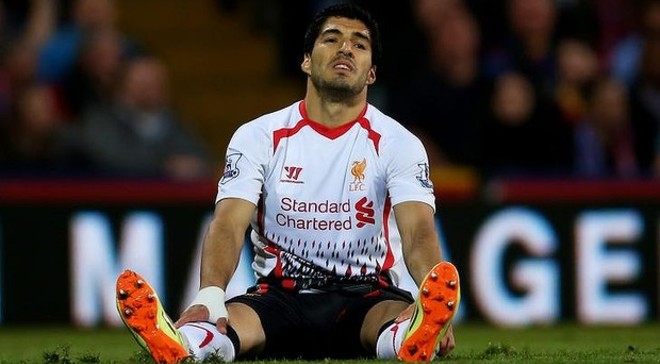 Luis Suarez damaged the reputation of English football with his serial offending and his departure to the Spanish league is not being mourned, the head of the Premier League says.

"He's done his time here ... I can't say I'm sorry to see him go," was the frank assessment of Richard Scudamore, chief executive of the world's most lucrative league, about one of the best players to have played in England's top division.

Liverpool sold Suarez to Barcelona for $US130 million ($A141 million) in July, soon after the player was given a four-month worldwide ban for biting an opponent at the World Cup.

The Uruguay international previously served two long suspensions for the same offence, once in the Premier League after biting Chelsea defender Branislav Ivanovic in April 2013, and was banned in 2011 for racially abusing Manchester United's Patrice Evra.

"He's a great player and I'm not taking anything away from his talents," Scudamore said.

"He's great to have but an accident waiting to happen, and if you spend your time trying to promote what's good about the Premier League, you're always waiting for the next thing to come along."

Scudamore said the latest biting incident during Uruguay's World Cup group game against Italy "clearly reflected on Liverpool as one of our great clubs. And it reflected on us (the Premier League)".

Suarez's departure to La Liga leaves English football without its top scorer from last season, but Scudamore says the competitiveness of the Premier League as a whole makes it stand out.

"That to me is more important in many ways, that the matches are competitive," Scudamore said.

"We've got enough stars, and we don't need absolutely every world megastar name to make this a successful league.

"There are more teams being talked about as able to win our title than you'll ever hear discussed in Spain. That makes us more interesting around the world. We have a much bigger global appeal than they do currently."