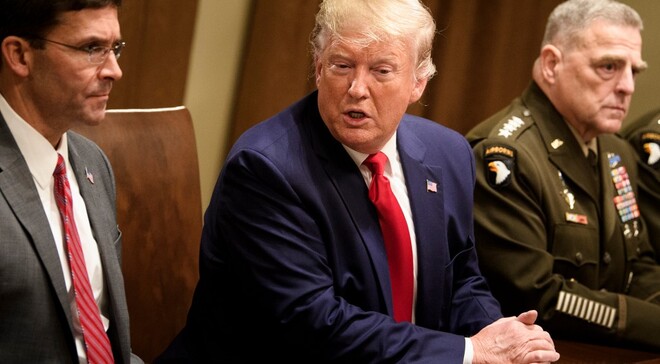 WASHINGTON - The Outgoing US President Donald Trump has fired his Defense Secretary Mark Esper just days after reports emerged of plans to withdraw troops from Somalia, and with just over two months before he leaves office after losing November 3, 2020 elections to Democratic Party flag bearer Joe Biden.

In a tweet on Monday night, Trump relieved Esper, who has been at the helm in as many months, and who was entrusted with efforts to withdraw American troops from several parts of the world especially in Africa where there are close to 7,000 solders in foreign missions.

Esper has also been integral in the Department of Defense's newly invented strategic negotiations team which embraces diplomacy whenever the US is under threat from countries. Iran and North Korea have been beneficiaries of these efforts to restore peace and stability.

In his place, Trump said Director of National Counterterrorism Christopher Miller will take over but in an acting capacity. Miller arrived immediately at the Department of Defense after the announcement was made, reports indicated.

"I am pleased to announce that Christopher C. Miller, the highly respected Director of the National Counterterrorism Center (unanimously confirmed by the Senate), will be Acting Secretary of Defense, effective immediately," Trump said in a tweet.

"Chris will do a great job! Mark Esper has been terminated. I would like to thank him for his service," added Trump, who has refused to concede defeat, arguing that the just concluded elections were rigged by the insiders, citing instances in Pennsylvania and Georgia among others.

Miller will at least lead the department until January when Biden takes over but it's unclear if America will go on with plans to withdraw troops from Somalia. President Mohamed Abdullahi Farmajo had asked Washington to reconsider the decision, arguing that it would affect the fight against Al-Shabaab.

Currently, there are close to 600 US servicemen in Somalia and are mainly tasked with training the Danab Special Forces. But in some cases, these troops from the US Africa Command, help the local forces in launching airstrikes against the militants.

House Speaker Nancy Pelosi condemned Trump's decision, arguing that it is part of the wider plan to "sabotage" institutions before his actual exit. She insisted that the US cannot be held at ransom by someone who "lost on the ballot".