A senior commander with Tigray forces surrenders in Ethiopia amid conflict 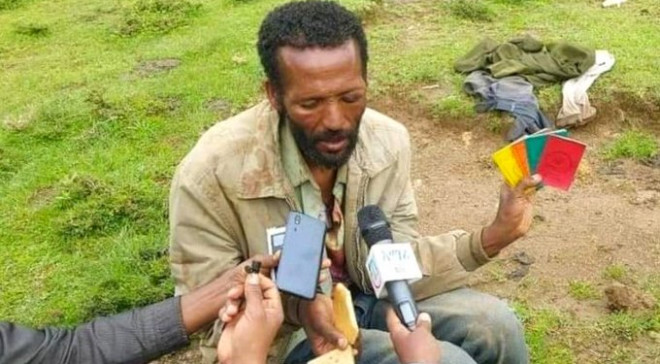 One of the commanders of TDF Colonel Gebrehiwot Gebreaelaf surrendered to the Ethiopian military [Photo: FBC]

NAIROBI, Kenya - A leading commander of Tigray Defense Forces [TDF] has reportedly surrendered to the Ethiopia National Defense Forces [ENDF], state media reported, in what could be a big blow to the Tigray fighters who have been in conflict with the federal army.

Colonel Gebrehiwot Gebreaelaf, a respected commander within TDF ranks, reportedly defected on Saturday, in what could significantly affect the gains made by the Tigrayan army, which is advancing into Afar and Amhara territories in northern Ethiopia.

State media claimed Colonel Gebrehiwot Gebreaelaf defected at Gasay in front of his troops during a counterattack. TDF spokesperson Getachew Rada was not immediately available for comment but in recent weeks, he's been accusing ENDF of spreading propaganda.

Amhara Region Communication Bureau stated that several bank accounts, four fake ID cards, and a packet of cannabis have been captured from the hands of the TDF commander. No photos were taken to confirm the assertion.

The colonel confessed to police that many of his troops have been destroyed as some scattered to various places after the defeat they encountered. The bureau called on the community to keep vigilant on terrorist group activities and inform the police of any suspicious activities.

But in recent months, ENDF and Prime Minister Abiy Ahmed have been asking civilians to join the war against TDF. The TDF has for many occasions declared victory against the federal army, something which Addis Ababa has repeatedly refuted.

Attempts by the TDF enterprise to invade some parts of Humera and surroundings are being gallantly thwarted by joint counteracts of security forces and the community, Col Demeke noted.

The community in the area is in a good position to neutralize the TDF in the area once and for all, he added. Ethiopia has repeatedly referred to TDF as a terrorist group, a claim which the Tigrayan fighters have often denied.

The United Nations, several international community partners among other groups have been calling for a ceasefire in the country. However, TDF insists that Ethiopia must first open various routes besides restoring telecommunications infrastructure before embracing a ceasefire.