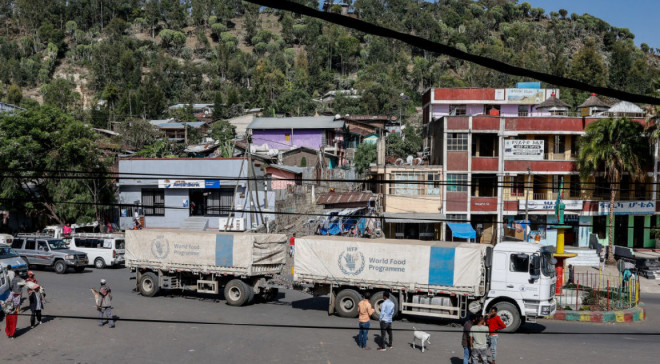 "Flying debris from the strike injured a driver contracted by WFP and caused minor damage to a WFP fleet truck," a WFP spokesperson said [Getty]

ADDIS ABABA - A United Nations [UN] vehicle carrying food was targeted by a drone strike in Ethiopia's Tigray region, the Sudan Tribune reports, with the new rage threatening to further destabilize the country, which is one of the Horn of Africa's largest economies.

"The truck was destroyed and the driver& other people wounded," said TPLF spokesman Getachew Reda who accused the government of Ethiopia of being behind the shelling.

The attack in Shire town in Tigray comes amid ongoing calls for a ceasefire in the country, about three weeks after fighting between the Ethiopian National Defense Forces [ENDF] and Tigray People's Liberation Front [TPLF] was triggered.

Ethiopian Air Force has been waging drone strikes in Mekelle, the regional administrative capital of Tigray, but Addis Ababa has often denied the allegations. Further investigations indicate that the ENDF is getting assistance from Eritrea but the airstrikes have been mainly targeting innocent civilians.

Reports from Shire confirmed that the latest airstrike badly wounded a WFP worker driving the vehicle which was carrying humanitarian aid to the people of Western Tigray. It's from Western Tigray Eritrea army is accused of making entry to the troubled state of Ethiopia.

The wounded worker, sources further confirmed, was taken to a nearby hospital within Tigray's Shire city and is currently undergoing treatment. The WFP is yet to confirm the latest hostility against humanitarian workers within the Horn of Africa nation.

For one month, the Ethiopian military and their Eritrean counterparts have been on a rampage in Tigray despite calls for a ceasefire, mostly targeting innocent civilians. A total of eight airstrikes have been reported in Tigray within that period according to official statistics.

On September 13, one person was injured in drone strikes on Mekelle University and a TV station in the Tigray region. Before this incident, seven people mainly children were killed in the same town, forcing TPLF to wage a series of retaliatory attacks in the Amhara and Afar regions.

Ethiopian authorities have not yet commented on today’s air strikes but previously, the government has remained mum over its own atrocities targeting innocent people in the region which has been at war with ENDF over political differences in the administration of Abiy Ahmed.

Prime Minister Abiy Ahmed is under pressure to embrace a ceasefire besides fast-tracking the African Union-led mediation with TPLF to broker a truce in the country.