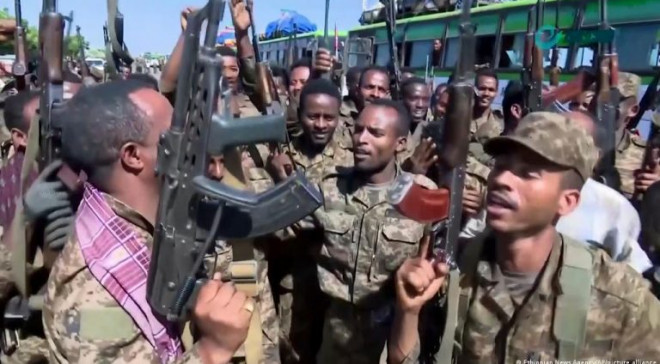 NAIROBI, Kenya - The Tigray Defense Forces [TDF] has refuted claims that it has been recruiting child soldiers, arguing that the recent photos published by the federal government were not only "fake" but also "total misuse" of the media.

For the last eight or so months, TDF has been battling with the Ethiopia National Defense Forces [ENDF], which had a strong backing of Eritrea troops and the Amhara regional forces which TDF refers to as "expansionists".

Throughout that period, the federal government led by Prime Minister Abiy Ahmed has been accusing TDF of recruiting child soldiers, adding that the group is also notorious for human rights violations across the Tigray region.

But in an interview with BBC's Hardtalk, Getachew Rada, the spokesperson of TDF, dismissed the allegations as "fake" and "unfortunate". According to him, TDF has "enough adults who are trained and ready to defend our territory to the last man".

He added: "Addis Ababa is famous for staging fake claims to implicate our team which is executing security responsibilities with a lot of professionalism. Whatever they are parading is fake and does not deserve your attention."

The former Information Minister further said TDF does not work with "minors" in such battles, adding that, "the truth shall come out. Addis Ababa is clearly crumbling, they have run short of ideas". He said TDF will protect her territories "religiously".

On killing children and women across Afar and Amhara regions, Getachew Rada dismissed the reports but welcomed independent inquest to ascertain the truth. The claims had been made by the UN global body in charge of children; the UNICEF.

The conflict started in November 2020 when the TDF attacked Northern Command, forcing the federal troops to launch an operation in the region. While the federal troops would withdraw in June 2021, TDF has continued with retaliation, accusing ENDF of committing genocide in Tigray.

Abiy Ahmed has struggled to lead the country since taking over in 2018, with his Nobel Peace Prize of 2019 fast diminishing. The TDF now says it will only tolerate ceasefire should the government restore electricity, communication, and other essentials in Tigray.