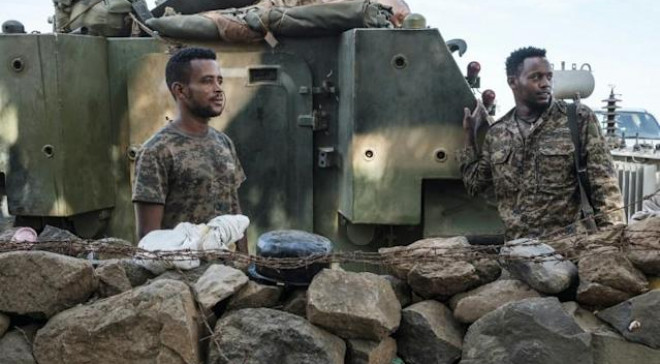 FILE: Ethiopian soldiers pictured last November at a military camp in the Tigrayan town Dansha where the first shots in the conflict were reputedly fired

NAIROBI, Kenya - Ethiopia has threatened to deploy a federal army to various places in Tigray following the decision by Tigray Defense Forces [TDF] to enter neighboring states as the war in the Horn of Africa takes another dimension, possibly to escalating levels.

The federal government on Friday said it could be forced to deploy its “entire defensive capability” against the restive Tigray region after advances by rebels into neighbouring regions. TDF has made advances in both Afar and Amhara states.

On Friday, TDF rebuffed calls on Friday to withdraw from the neighbouring Afar and Amhara regions, the government in Addis Ababa said the rebels were testing its patience and threatening the ceasefire called in June.

In a statement, the Ministry of Foreign Affairs accused the TDF of refusing to honor the ceasefire, adding that the international community should immediately chip in and "tame" the Tigray forces, which have been at loggerheads with the federal army.

The ministry said the government will defend cultural sites in reference to a town that was recently captured within the Amhara region. The push and pull are seemingly escalating, with the impending deployment of federal troops to Tigray.

"The government will take all the necessary measures to ensure that these sacred places and other institutions are well protected and we call the international community to condemn TDF acts," read the statement.

The light that failed: South Sudan’s ‘new dawn’ turns to utter nightmare Ethiopia’s foreign ministry said the Tigray forces’ incursion into Amhara and Afar was pushing the government “to change its defensive mood which has been taken for the sake of the unilateral humanitarian ceasefire”. The incursions have displaced some 300,000 people, it said.

Ethiopia could “deploy the entire defensive capability of the state” if overtures for a peaceful resolution to the conflict are not reciprocated, the statement said.

A further escalation came when an Amhara regional official said it would launch an offensive on Saturday after Tigrayan forces entered the region and took control of a town hosting a Unesco world heritage site.

“This is the time for the Amhara people to crush the terrorist group,” Sema Tiruneh, the Amhara region’s head of peace and security, told state media. “Everyone should come forward and defend themselves.

Getachew said Tigray forces had crossed into Amhara and Afar in an attempt to break the blockade that Ethiopia’s government has imposed on Tigray.