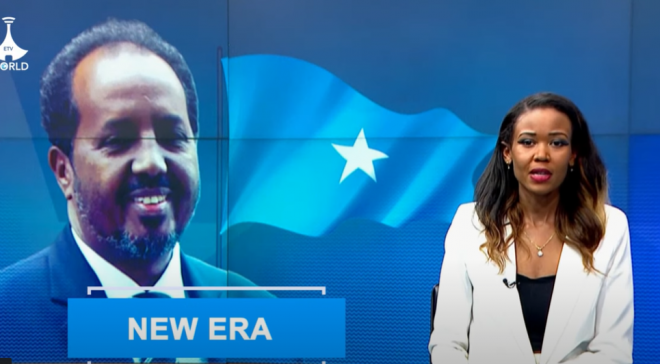 ADDIS ABABA - The ties between Somalia's President Hassan Sheikh Mohamud with Addis Ababa could be a thorn in the flesh, Ethiopia's state Television ETV claims.

In recent years, Ethiopia has been a major security stakeholder in Somalia, having actively participated in the fight against Al-Shabaab. Ethiopian National Defense Forces [ENDF] was credited for flushing Al-Shabaab out of Mogadishu in 2011.

During the formation of the federal government of Somalia in 2012, Ethiopia played a significant role and went on to closely work with the administration of Hassan Sheikh Mohamud. So close was the cooperation that Somalia closely worked with Tigray People's Liberation Front [TPLF] then the dominant party in Ethiopia's administration.

Hassan Sheikh, the TV reports, worked with the administration of both Meles Zenawi and Hailemariam Desalegn, on matters of regional integration and trade, besides investing in security fronts in the fight against Al-Shabaab. The then government had strong links with the TPLF group.

Interestingly, with the comeback of Hassan Sheikh as Somalia's president after five years of political coldness and the civil war in Ethiopia, priorities have since shifted, throwing the new president into limbo, given his close ties with the Tigray forces, who were instrumental in his policy on Al-Shabaab war.

ETV said There are uncertainties that certain members of Hassan SHeikh Mohamud's Govt may derail early efforts to improve relations between Somalia and Ethiopia. The uncertainty actually comes from Hassan Sheikh's "strong relationship with TPLF".

At the moment, TPLF is at loggerheads with Ethiopian National Defense Forces, perhaps making it extremely difficult for President Hassan Sheikh Mohamud to pick sides. Reports indicate that he's conflicted with picking either the government of Abiy Ahmed or sticking with his old allies; the TPLF.

During the swearing-in of Hassan Sheikh, PM Abiy Ahmed insisted that his administration will "closely cooperate with Somalia on matters development and regional integration". The PM further said his government will assist Somalia to tackle insecurity.

Sources in Ethiopia's federal government according to ETV noted that the administration of Abiy Ahmed believes TPLF is keen to "hijack" Hassan Sheikh's relationship with Ethiopia, thus making it difficult for the two countries to cooperate efficiently.

The TPLF, the ETV claims, is using strong ties with Hassan Sheikh, especially people in Somalia's government to frustrate the revamping of ties between the two countries. This, sources add, has triggered Ethiopia's decision to treat the government of Hassan Sheikh with caution.

Before Al-Shabaab's attack on Ethiopia, there were plans by President Hassan Sheikh Mohamud to visit Ethiopia, but the move seems to have been aborted. He has already visited Eritrea, Kenya, Uganda, and Tanzania to boost bilateral ties.

Interestingly, Al-Shabaab is said to have taken advantage of the current standoff to invade Ethiopia, with the most recent incursion taking place last month. The group, it has been established, is trying to expand territory by cooperating with TPLF and Shene, groups that have been designated in Ethiopia as "terror" entities.

Officials in Ethiopia claimed that Ethiopian National Defense Forces in cooperation with Somali regional forces killed over 3,000 Al-Shabaab militants during the incursion, including three prominent leaders, a claim disputed by the militants.

This is the first time a renowned Ethiopian giant media was reporting on the alleged frosty relationship between Ethiopia and Somalia, casting doubts about future cooperation between the two nations.

Redwan Hussein, the National Security Advisor to Abiy Ahmed, termed Al-Shabaab's incursion as a strategy of "Sabotaging Ethiopia's development and displacing it from regional political interests." He vowed that Ethiopia will cement entry and allow her borders.

But the suspicions between Addis Ababa and Mogadishu could further escalate insecurity in the two countries, given that Ethiopia is critical in degrading Al-Shabaab within Somalia. There is pressure from different quarters to have Hassan Sheikh choose sides; whether to stand with Addis Ababa or TPLF.

This report came at a time when there are reports that the relations between Ethiopia and the new government of Somalia hit low-point and have spiralled downward over the past months since Hassan following Hassan Sheikh's Egypt visit.