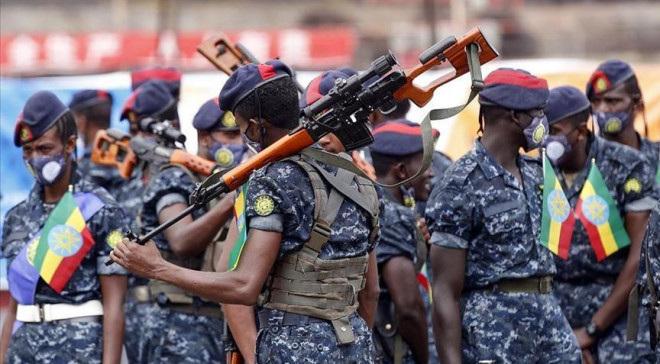 On Nov. 4 Ethiopia launched what it described as a massive law enforcement operation in Tigray [File photo]

NAIROBI, Kenya - The Ethiopia National Defense Forces [ENDF] has reportedly attacked the Tigray Defense Forces [TDF], in what could further escalate the tensions in the Tigray region, and perhaps derail efforts to restore order in Ethiopia.

For the last nine months, both ENDF and TDF have been battling for control of Tigray, leading to mass murder, displacement of people, rape, and torture. Both sides have accused each other of atrocities in the Tigray region.

State media reports that the TDF under the military command of General Tsadkan Gebretensay has been fully destroyed by the Ethiopian National Defense Forces. It is not clear when the reported assault happened but ENDF has been planning retaliatory attacks.

ENDF has lost key strategic areas of Tigray and in neighboring Afar and Amhara states, something which risks its imminent collapse. The TDF was closing into several parts of the country according to reports.

The TDF contingent with a large number of fighters entitled Army 2 which was being led by Maj.-Gen Yohannes and its subordinate Maesho Beyene and Kebede Fekadu and a mechanized leader Colonel Gebreselasse has been fully annihilated, the National Defense Force Communication Directorate announced.

Forces of the TDF group that were using Gashena town as a post and invaded some parts ranging from Wadala to Lalibela towns have been smashed in coordinated counterattacks by the national army, Regional Special Forces, Amhara Militia, and peasants.

Scattered forces of the TDF in Meket, Muja, Nifas Mewcha, and surrounding areas are being brought to pieces like a large number of artilleries and military equipment have been captured by the army, state media reported.

Elsewhere, Prime Minister Abiy Ahmed has praised Ethiopians for standing up for the Ethiopian National Defense Forces [ENDF]. Recently, he asked civilians to join the war, something which risks the country is plunging into civil war.

He further expressed gratitude to all who stand in solidarity with national efforts underway to protect the sovereignty and territorial integrity of the nation. TDF insists that it will only agree to a ceasefire if certain conditions are achieved.