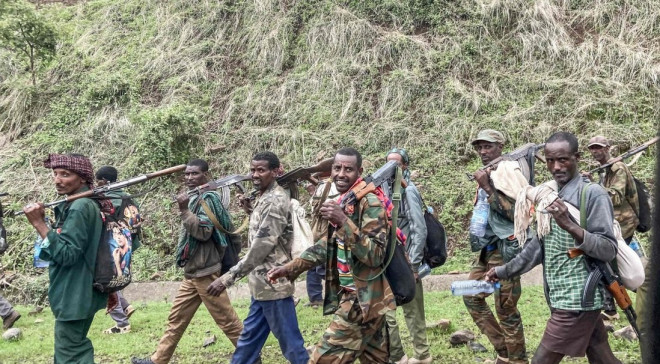 Members of the Amhara militia near the village of Adi Arkay, near Gondar, Ethiopia on July 14. Photo: AFP

ADDIS ABABA - Increasingly under pressure, Ethiopian Prime Minister Abiy Ahmed has asked locals to use all legal avenues including taking up arms and holding peaceful protests to help his administration to defeat Tigray Defense Forces [TDF].

His statement comes just a few hours after the TDF took the strategic Kombolcha town, as the federal troops struggled to fight back. The Ethiopian National Defense Forces [ENDF] has been struggling to contain the re-energized TDF.

A few hours earlier, the Amhara regional government which has been closely working with the federal government, declared a state of emergency as TDF made further gains. The TDF is expanding its territories, even managing to secure some parts of the Amhara and Afar regions.

In his statement, Abiy Ahmed, the Nobel Peace Prize winner of 2019, said “terrorist TDF group continues to be a scourge for Ethiopia, like an evil boy who burdens his mother with a scourge of an evil.” He accused the TDF of being inspired by “its hate propaganda,” and said, “with the forces, it had mobilized, the TDF has opened fire on four fronts, and continued its activities of pushing the country to its demise.”

Ahmed, who took over power in 2018, further hailed the national army and some regional forces for "standing with the people of Ethiopia". Further, he noted that “attempts by the enemy were being thwarted by the ground army and in the air.”

The PM also claimed that TDF has decided to bring all its fighters to the war front as it increasingly loses "ground". He also claimed that decent airstrikes at Mekelle destroyed some of the heavy machines that were being used by TDF to "commit crimes against our people".

“In the future, the enemy will gather its remaining forces and carry out similar attacks,” the PM said and cautioned that “knowing that the source of our adversity is our weakness and neglect, we must be vigilant and be watchful. Our number is strength when we stand together and understand [each other]. Our separation is convenient for the enemy. If we can listen to and cooperate with each other, the power of the enemy will begin to crumble,” he added.

Further, PM Abiy called on “our people” to “temporarily hold occasional affairs and organize and march through legal manner with every weapon and power and, or might in order to prevent, reverse and bury the terrorist TDF that has come to the destruction.

"This great nation has not overcome great historical challenges by standing and watching on the sides or being content with just a few victories. We have defeated the attacks by standing together and standing guard with perseverance for our country," he noted.

Ethiopian war in Tigray broke out in 2020 November when TDF attacked the Northern Command. Thereafter, the PM dispatched Ethiopian National Defense Forces to the region, triggering a conflict that has left thousands of people dead and others displaced.