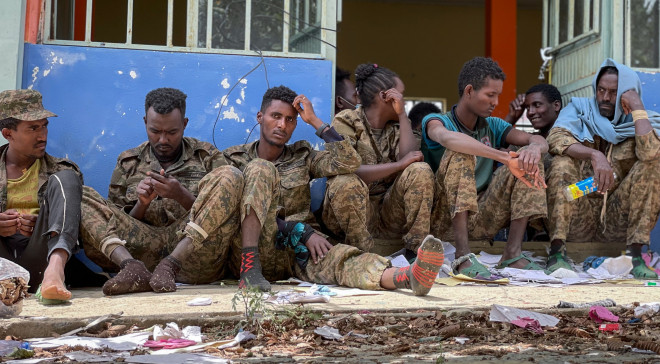 NAIROBI, Kenya - The International Committee of the Red Cross [ICRC] has started visiting members of the Ethiopian armed forces in the Tigray region earlier this week, the organization has said, just days after Addis Ababa vowed to pursue Tigray Defense Forces [TDF].

Despite the declaration of ceasefire, TDF has been making advances towards the south, pursuing the Amhara regional forces, who were part of the team that unleashed genocide in Tigray. It's believed that thousands of Ethiopia National Defense Forces [ENDF] were captured in Tigray.

“Visiting people in places of detention is a core part of our mandate and an established role for the ICRC in the country. We are pleased to now be extending this important activity in Tigray,” said ICRC’s Head of Operations in Ethiopia, Maria Soledad Rueda Garcia.

“As elsewhere in Ethiopia, our visits in Tigray focus on the protection and dignity of the detained individuals. Our ongoing bilateral dialogue with the concerned authorities is essential to that work.”

Last week, some reports indicated Red Cross had negotiated for the release of the number of ENDF soldiers, with photos showing some of them being escorted out of detention camps. However, Garowe Online could not establish the authenticity of the claims.

Across Ethiopia, Red Cross has been keen to ensure all prisoners of war are released. The Tigray People's Liberation Front [TPLF] otherwise known as Tigray Defense Forces [TDF] arrested a number of federal troops, who are accused of killing innocent civilians. The outfit has already declared victory.

In 2020 the ICRC visited some 72,000 persons deprived of their liberty in over 50 places of detention throughout Ethiopia, providing basic material assistance, helping with access to water and sanitation, and facilitating contacts between detainees and their families. The ICRC has also provided material to contain the spread of COVID-19 in prisons.

The ICRC works around the world to ensure humane conditions of detention through regular visits, meetings with detainees to monitor their conditions and treatment and to bring about improvements. The ICRC's findings are discussed confidentially with the concerned entities.

The ICRC has been present in Ethiopia since 1977. In addition to our work in places of detention, we support people with physical disabilities and provide protection and assistance to communities. We work closely with the Ethiopian Red Cross Society to reconnect families separated by armed conflict and other situations of violence.