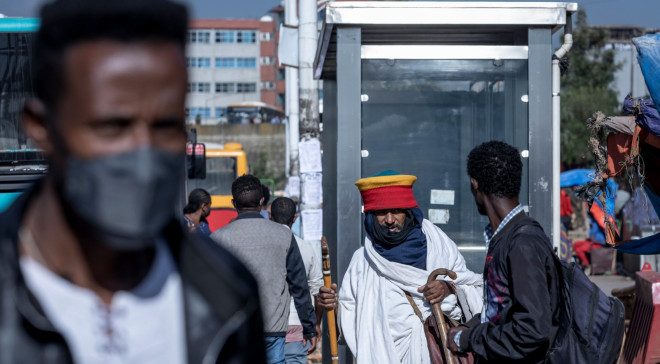 NAIROBI, Kenya - A report published by the Human Rights Watch suggests that authorities in Ethiopia have arbitrarily detained, forcibly disappeared, and committed other abuses against ethnic Tigrayans in Ethiopia’s capital, Addis Ababa, in what now confirms Tigray Defense Forces [TDF] claims of mass murders in the Tigray region.

The HRW now wants authorities in Ethiopia to immediately account for Tigrayans’ forcibly disappeared, release those being held without credible evidence of a crime, and end all discriminatory treatment.

On June 28, following eight months of fighting in Ethiopia’s northern Tigray region, Tigrayan forces recaptured the regional capital, Mekelle, while government forces withdrew. Since then, TDF has been advancing into neighboring Afar and Amhara states.

“Ethiopian security forces in recent weeks have carried out rampant arbitrary arrests and enforced disappearances of Tigrayans in Addis Ababa,” said Laetitia Bader, Horn of Africa director at Human Rights Watch. “The government should immediately stop its ethnic profiling, which has cast unjustified suspicion on Tigrayans, produce information on everyone being held, and provide redress to victims.”

Human Rights Watch also reviewed court and police documents and relevant photos. An August 11 email to Attorney General Gedion Timothewos summarizing the Human Rights Watch findings and requesting further information has not received a response. This research supplements interviews in November and December 2020 with nine people subjected to profiling, searches, and arbitrary arrests of Tigrayans in Addis Ababa after the conflict in Tigray began in November, HRW notes.

Last month, the Addis Ababa police commissioner, Getu Argaw, told the media that over 300 Tigrayans had been arrested, saying they were under investigation for their alleged support for Tigray’s former ruling party, the Tigray People’s Liberation Front [TPLF], which Ethiopia’s parliament designated as a terrorist group in May.

Although the attorney general told the media that ordinary citizens would not be affected, in the arrests that Human Rights Watch researched, most if not all appeared to have been targeted on the basis of ethnicity.

Witnesses said that security forces stopped and arrested Tigrayans on the streets and in cafés and other public places, and in their homes and workplaces, often during warrantless searches.

In many cases, security forces checked people’s identification cards to confirm their identity before taking them to a police station or other detention facility. A Tigrayan political activist and a Tigrayan aid worker, both based in Addis Ababa, were among those arrested in July, as were at least a dozen journalists and media workers who have reported on abuses against Tigrayans.

While family members often knew where their relatives were being held during the first few days of detention, many were then secretly transferred to unidentified locations. Lawyers and families discovered, often weeks later and sometimes only informally, that some detainees were being held in the Afar region, over 200 kilometers from Addis Ababa. The whereabouts of others, including 23 cases Human Rights Watch documented, remain unknown.

On July 2 the authorities arrested a 34-year-old Tigrayan man along with a friend and two other Tigrayans in a café in the Haya Hulet neighborhood, popular with Tigrayans. He said that 12 police officers entered the café, checked their IDs, and took them to the Karamara police station, where all detainees were separated by ethnicity.

While the man was released the following day, his friend was among approximately 90 Tigrayans who were not. Two days later, the man received a call from his friend using a borrowed phone, who told him: “We are being transported by 16 buses. There are police, intelligence, and also military.” The man called the number the next day and a police officer said that the detainees had been taken to Afar.

Security forces have also intimidated and threatened people, including detainees and their relatives. “Many of the police officers who were in the compound [of the detention center] were insulting me,” said a woman detained in July. “They were using abusive words that are directly attached with identity. They said I was a ‘venomous snake.’”

Ethiopian government abuses against Tigrayans in Addis Ababa started after the Tigray conflict began in November. In November and December, the authorities arbitrarily arrested and dismissed from work Tigrayans working in the government security and civil services, profiled Tigrayans during systematic ID checks, and searched homes without warrants, in many cases repeatedly. These actions have restricted Tigrayans’ freedom of movement throughout the duration of the conflict.

Many of the unlawful tactics currently being used by the security forces, such as secretly transferring suspects among various police authorities to evade legal requirements and prolong detention periods, were used in 2020 against arbitrarily detained opposition figures and journalists.

Enforced disappearances are defined under international human rights law as the arrest or detention of a person by state officials or their agents, followed by a refusal to acknowledge the arrest or to reveal the person’s fate or whereabouts. Forcibly disappeared people are outside the protection of the law, making them more vulnerable to torture, extrajudicial execution, and other abuses.

Forcibly disappearing people deny them access to lawyers, undermining their right to a fair trial, and may inflict severe mental suffering on their families. In Ethiopia, their situation is exacerbated because detainees rely on their relatives to provide them with adequate food, clothes, and other essentials that the government does not provide.

Ethiopian authorities should comply with international legal prohibitions against arbitrary deprivation of liberty and enforced disappearances, Human Rights Watch said. As an urgent matter, they should provide families with information about their loved ones, release those wrongfully detained, and transfer civilians held in military custody to civilian control.

“The Ethiopian government’s ethnic profiling, arrest, detention, and enforced disappearances of Tigrayans are unlawful and unjust,” Bader said. “Donor countries should raise their concerns with the government to immediately end and investigate these discriminatory practices that threaten to worsen ethnic tensions in the country.”