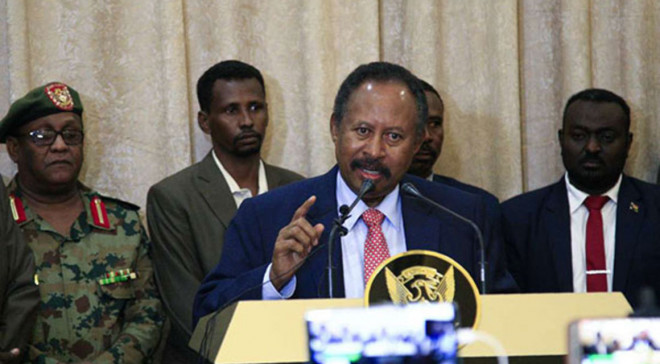 Sudan's Prime Minister Abdalla Hamdok. The PM has called on the US remove Khartoum from its list of state sponsors of terrorism. PHOTO | EBRAHIM HAMID | AFP

NAIROBI, Kenya - Authorities in Khartoum may have changed their mind over the controversial filling of the Grand Renaissance Dam [GERD] along the Blue Nile in Ethiopia, something which might give the conflict a new dimension.

A Sudanese official on Sunday said that no drop in the water level of the Blue Nile has been detected despite Ethiopia’s start of the second filling of the Grand Ethiopian Renaissance Dam, despite complaints by Egypt that water levels along the Nile were going down.

“Since April, Al-Daim station on the border with Ethiopia has not monitored any drop in the daily level of the water coming from the Ethiopian Plateau to Sudan,” Hamid Mohamed Ali, director of Sudan’s Al-Rusaires Dam, said in a statement.

“Although Ethiopia started the second filling of the GERD, yet the daily water amounts are stable,” he noted.

But Ali stressed that despite Ethiopia’s start of the second filling of the GERD, a legal and binding deal should still be signed regarding filling and operating of the dam. The Nile is an important source of livelihood in the north of Africa.

Sudan, Egypt, and Ethiopia have been in talks for years, under the umbrella of the African Union, over the technical and legal issues related to the filling and operation of the GERD.

On Monday, Ethiopia's Prime Minister Abiy Ahmed has congratulated Ethiopians on the successful completion of the Grand Ethiopian Renaissance Dam, arguing that it's an important milestone in the country's quest to generate more power.

Prime Minister Abiy Ahmed reiterated that Ethiopia is in a better position to maintain resiliency in all sectors of engagements. He has been on the fire front pushing for the completion of the project which attracted international attention.

The reservoir of the Grand Ethiopian Renaissance Dam [GERD] has reached an overtopping water level following the completion of the second filling process. Egypt has particularly been unhappy over the project.