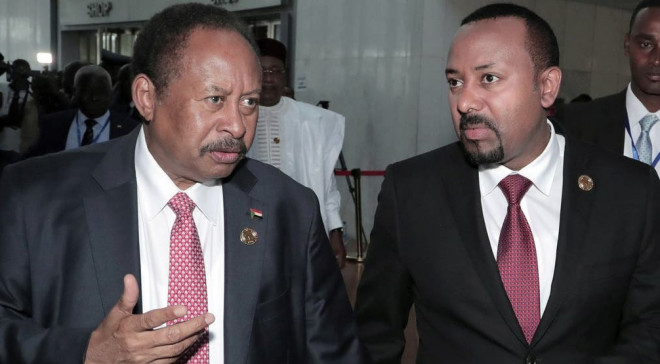 NAIROBI, Kenya - Sudan's Prime Minister Abdalla Hamdok will mediate the current conflict between Tigray Defense Forces [TDF] and the Federal Government of Ethiopia, The Sudan Tribune has reported, even as the crisis now enters the tenth month without a concrete solution.

According to the Sudan Tribune, Hamdok is in contact with the Ethiopian government and the TDF, with the major aim being finding a lasting solution to the conflict, and allowing humanitarian aid to suffering civilians.

On Wednesday, Hamdok discussed the matter with US Secretary of State Antony Blinken, with the re-entering of Eritrean troops to the Tigray region also featuring. Sudan has been hosting thousands of refugees from Tigray who are running away from the current war.

Hamdok, also, informed of his initiative the heads of the East African bloc IGAD, Eritrea, and a number of friendly Western countries, including France and the United States of America. Particularly, the US wants the conflict solved soonest.

The northern Africa nation has borne the brunt of the Tigray war, hosting thousands of refugees with no clear plan for the end of the war. Sudan also hosts refugees from Eritrea who are you to be repatriated following the civil war in the 90s.

Further, Khartoum says this conflict might ignite other hotspots in the multiethnic country pointing to the western Benishangul-Gumuz region which is also bordering Sudan as was the case in December 2020.

"We want to support Sudan’s transformation from a source of instability to a partner in resolving the challenges of a volatile region, most urgently by working together to address the conflict in Ethiopia, to which there is no military solution," Power said in a lecture at the University of Khartoum.

Last month, President Emmanuel Macron of France spoke with Hamdok and Ethiopian Prime Minister Abiy Ahmed where he expressed his concern about the continued fighting in the country and called to allow unfettered humanitarian assistance to the needy.

"The President also stressed that the development of the situation required the negotiation of a break in hostilities and the opening of political dialogue between the belligerents, with respect for the integrity and unity of Ethiopia," reads a statement released by the French presidency.

On his part, US Secretary of State Antony Blinken discussed Wednesday with Hamdok the expansion of fighting in the Amhara and Afar regions of Ethiopia, and the need for a negotiated solution.

"Secretary Blinken and PM Hamdok agreed to encourage all parties to enter negotiations toward a ceasefire, to engage in an inclusive political dialogue to preserve the unity and integrity of the Ethiopian state, and to allow full humanitarian access to those in need," said the State Department.