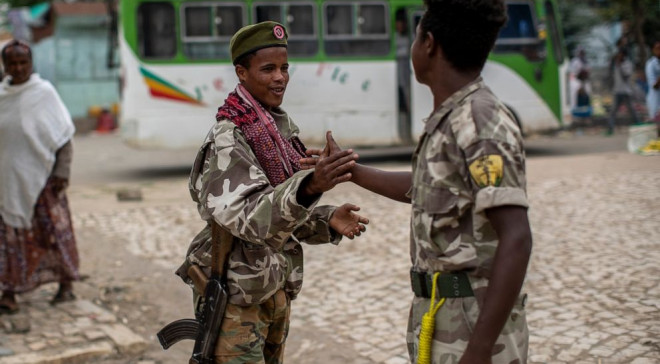 FILE - In this Friday, May 7, 2021 file photo, fighters loyal to the Tigray People's Liberation Front (TPLF) greet each other on the street in the town of Hawzen, then-controlled by the group but later re-taken by government forces, in the Tigray region of northern Ethiopia. The Tigray forces that in late June 2021 have retaken key areas after fierce fighting have rejected the cease-fire and vowed to chase out Ethiopian government forces and those of neighboring Eritrea. (AP Photo/Ben Curtis, File)

NAIROBI, Kenya - The Ethiopian crisis is now spilling over to other regions following Thursday's capture of Lalibela by Tigray Defense Forces [TDF], which has now refused to cede grounds and pave way for constructive dialogue.

Lalibela is in Amhara state and its capture was the culmination of renewed retaliatory attacks against Amhara forces that took part in the Tigray operation that saw the federal army pursue the Tigray Defense Forces following the attack at Northern Command.

Ethiopia has already said could “deploy the entire defensive capability of the state” if overtures for a peaceful resolution to the conflict are not reciprocated, the statement said.

And the conflict is now turning from bad to worse following the refusal by TDF to withdraw from Amhara state, following the region to plan an offensive on Saturday after Tigrayan forces entered the region and took control of a town hosting a Unesco world heritage site.

“This is the time for the Amhara people to crush the terrorist group,” Sema Tiruneh, the Amhara region’s head of peace and security, told state media. “Everyone should come forward and defend themselves.”

Getachew said Tigray forces had crossed into Amhara and Afar in an attempt to break the blockade that Ethiopia’s government has imposed on Tigray. The two states are critical supply routes for humanitarian aid.

The conflict threatens to destabilize Africa’s second-most populous country, where thousands of people have already been killed in the nine-month war, The Guardian reports.

Ethiopia declared a ceasefire in late June as its military retreated from Tigray and the resurgent Tigray forces retook key towns and walked into the regional capital, Mekele, to cheers. The conflict erupted in Tigray in November after a falling-out between the prime minister, Abiy Ahmed, and the Tigray ruling party that had dominated Ethiopia’s government for nearly three decades.

Tigray forces mobilize against militias from neighboring provinces Since then, thousands of people have been killed and hundreds of thousands of people face famine conditions. The United Nations and the United States have sent high-level officials to Ethiopia to urge more access to aid.

Any new offensive by the Amhara regional forces would go against the federal government’s command and terms of the ceasefire.

While the United Nations and the United States raise the alarm about the Ethiopian government’s continuing near-complete blockade of the Tigray region and its 6 million people, the Tigray forces have vowed to secure the region and pursue its “enemies”.

They have said the prime minister needs to go as one of several preconditions for talks. However, Getachew said civilians in Amhara should have nothing to fear from Tigray’s forces.

“We have to deal with anyone who’s still shooting,” Getachew said. “If it takes marching to Addis to silence the guns, we will. But I hope we’ll not have to.”

“We’re not after Amhara territory or the people of Amhara. ... As long as they are not shooting at our people, we have no problem,” Getachew said

Fears of civil war in Ethiopia as the conflict in Tigray is now spreading to neighboring regions forcing 1000s of people to flee, aid agencies warn. Clashes could be triggered between ENDF and TDF after seizing Lalibela. Horrific human rights violations were reported at the battle zone.