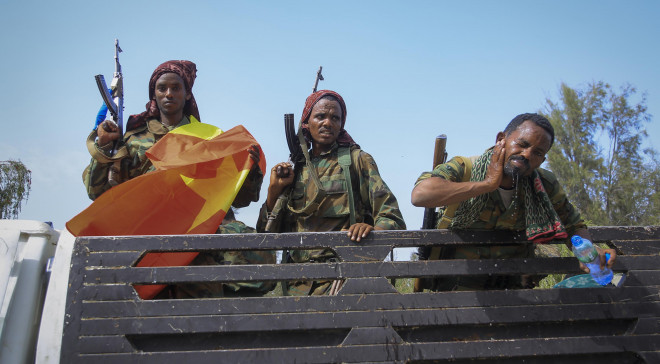 FILE - In this Tuesday, June 29, 2021 file photo, Tigray forces ride in a truck after taking control of Mekele, in the Tigray region of northern Ethiopia. The leader of the Oromo Liberation Army armed group that Ethiopia's government has designated a terrorist organization says his group has struck a military alliance with the Tigray forces, in an interview on Wednesday, Aug. 11, 2021. (AP Photo, File)

NAIROBI, Kenya - The Tigray Defense Forces [TDF] is in talks with the Oromo Liberation Army, something which could throw Prime Minister Abiy Ahmed off balance, as the civil war in Ethiopia escalates, in what could further destabilize the Horn of Africa nation.

The TDF team, which is seizing several parts of Afar and Amhara regions, said I was in talks with the Oromiya army, which comes from Ahmed's backyard. The Oromiya army accuses Abiy Ahmed of segregation and discrimination.

On Tuesday, the federal government of Ethiopia urged citizens to join the war, arguing that TDF is keen to destabilize the country. Thousands of Ethiopians have been protesting against TDF, which is keen the seize most parts of the country.

“We are in talks with the Oromo Liberation Army,” Debretsion Gebremichael, leader of the Tigray Defense Forces, told Reuters by satellite phone.

The TDF controls the Tigray region in Ethiopia’s north and its forces have been fighting federal troops since November in a conflict that has caused a major refugee crisis.

In recent weeks, the conflict has spread into two neighbouring regions, Afar and Amhara, displacing about another 250,000 people and raising international concerns over the wider destabilization of Africa’s second-most populous nation.

He declined to give further details. Also on Wednesday, Getachew Reda, a spokesperson for the TPLF, told Reuters by satellite phone that “some sort of agreement” was in the works. “It’s only natural that we work together with people who have a stake in the future of the Ethiopian state.”

Oromo Liberation Army [OLA] did not immediately respond to a comment request. It is a splinter group of the Oromo Liberation Front, a formerly banned opposition group that returned from exile after Prime Minister Abiy Ahmed took office in 2018.

The Ethiopian military also did not immediately respond to a request for comment. Abiy’s spokesperson, Billene Seyoum, said in an email the two groups - TDF and OLA - had been designated as terrorist organizations by parliament. She did not elaborate.

Fighting between federal troops and the TDF has forced more than two million people from their homes, and more than 50,000 people have fled into neighbouring Sudan.