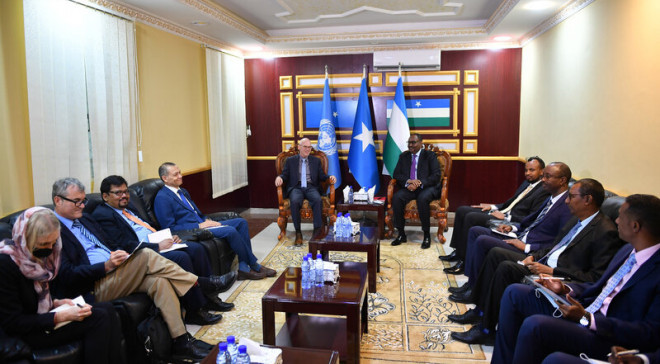 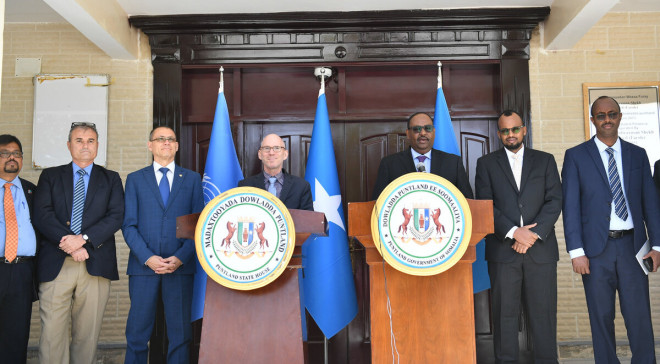 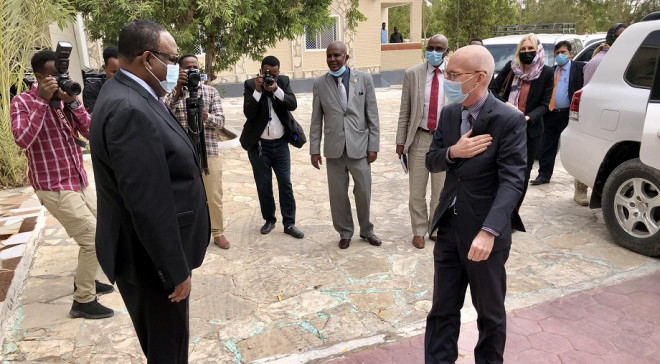 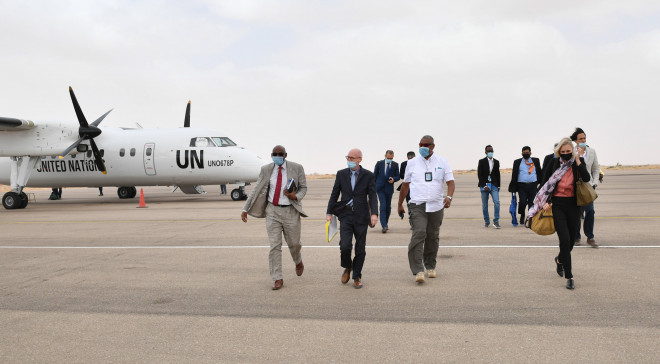 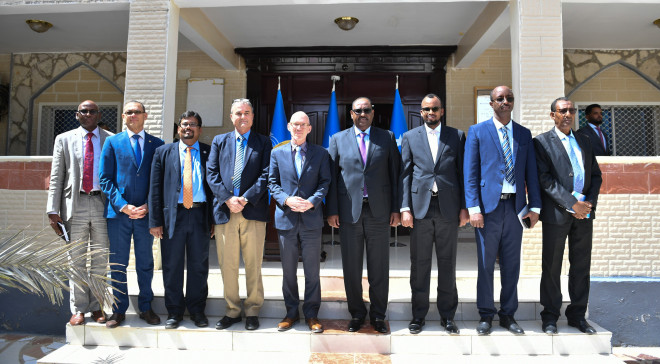 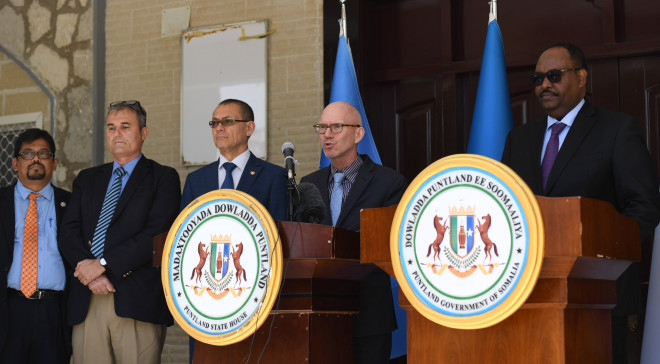 GAROWE, Puntland – A delegation of senior United Nations representatives today visited the Federal Member State (FMS) of Puntland, in Somalia’s north-east, to meet with its leadership on the provision of support.

“We’ve come to discuss with the President and his ministers the work the United Nations is currently doing in Puntland, and how the United Nations could better support Puntlanders in 2021,” the UN Secretary-General’s Special Representative for Somalia, James Swan, said at a joint media encounter in the FMS’ capital, Garowe, with Puntland’s President Said Abdullahi Deni.

The UN envoy also congratulated President Deni and his administration on their second anniversary in office, which was marked on 8 January, and commended the progress made on various fronts.

“Over the past two years,” Mr. Swan added, “Puntland has continued to make notable advances in the democratization process, the strengthening of governance and public finance management, security sector reform, and infrastructure development.”

Earlier, the UN Special Representative and senior officials of the UN family working in Puntland – the Somalia Country Director of the World Food Programme (WFP), Cesar Arroyo; the Representative to Somalia of the Office of the UN High Commissioner for Refugees (UNHCR), Johann Siffointe; and the UN Women Country Programme Manager for Somalia, Sadiq Syed – had met with President Deni and members of his cabinet. They followed that meeting with smaller, separate meetings.

In his remarks at the media encounter, the UN envoy highlighted how the world body’s current activities in Puntland ranged from support for ongoing reconciliation, security, and stabilization efforts to providing humanitarian and development assistance.

He zeroed in on some of the work carried out by WFP, UNHCR, and UN Women as a concrete example of that support.

In the case of UNHCR, the UN official said the refugee agency is supporting refugees, returnees, and internally displaced persons, as well as host communities, with the aim of ensuring that individuals can meet their basic needs and are given the tools to foster resilience.

“This includes work with the Attorney-General’s office and with the Ministry of Justice to improve access to judicial services for women,” he said.
The UN Special Representative and President Deni also addressed Somalia’s political situation in their meeting, particularly preparations for the country’s elections and the importance of strengthening good relations between federal and federal member state authorities.

“In this regard, I highlighted the need for constructive compromise between the Federal Government and the Federal Member States to reach agreement over the implementation of the electoral process. This is in the national interest,” Mr. Swan said.

“We again urge all of Somalia’s leaders to work together and to find ways to resolve outstanding issues, so that a credible electoral process can take place across Somalia,” he added. “This is a matter of urgency. It is time for leadership by Somalia’s main political actors. It is time for solutions, not more excuses why agreement can’t be reached.”

The UN delegation’s visit to Puntland was the third one to a Federal Member State this month, with the aim being to consult FMS leaders on the world body’s support. Previous delegations, led by the UN Special Representative, have visited South West State and Galmudug.

Bashir was a well-known figure among the community and regularly visiting public places to escape the radar of the security.