Al-Shabaab base captured in Puntland, Somalia 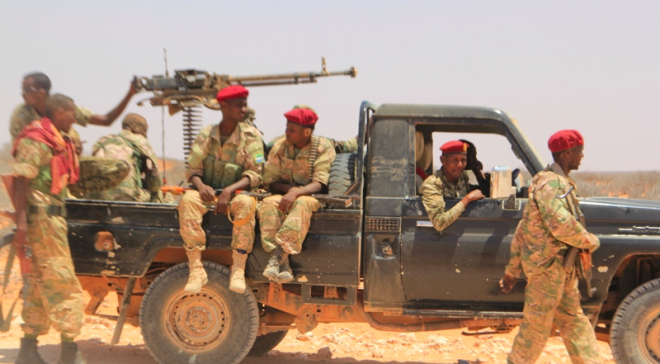 BOSSASO, Puntland - A base used by Somalia-based Al-Shabaab militants has been captured in the Puntland State of Somalia, state media reports, in the ongoing crackdown against the extremists, who are fighting to topple the fragile UN-backed Somalia administration.

Security forces drawn from Puntland are said to have raided the base located in Al-Miskad mountains of the Bari region, capturing the base that has been lately used to launch an offensive against innocent civilians in the Horn of Africa nation.

During the raid, state media noted, sophisticated weapons and Improvised Explosive Devices [IEDs] were seized. The devices are used by the militants during operations and have contributed to the deaths of thousands of people in Somalia and across the border.

Puntland is one of the most secure states in the war-torn nation but has lately been struggling to contain militant attacks, mainly in the northeast and southern part of the state, which borders Galmadug, another safe haven for the terrorists.

Al-Shabaab has been making inroads in the far east near Bosaso and also parts of Galkayo, the border city. It's in Galkayo that the militants have managed to wage deadly attacks but also, some ISIS militants have also been making their case known in the state.

The Somali National Army [SNA] has also continued with an offensive against Al-Shabaab militants, with operations in Central and Southern Somalia yielding fruits in recent weeks. The military has dismantled Al-Shabaab's logistics chain.

SNA destroyed the group’s main food store in central Somalia which was located near Mahas district in the Hiiraan region. The army destroyed a large warehouse in War-Ise village of middle Shabelle region where Al-Shabaab used to store weapons and fuel, state media said.

The group’s movement was also weakened after government troops attacked them on several different fronts. Military experts have described the current operation as the toughest Al Shabaab has faced in recent times.

Around 300 terrorists were killed in the operations and the group lost more ground as Somali National Army intensified its combat to hunt down Shabab. However, the group managed to attack Gen Yusuf military base in Mogadishu on Tuesday, killing at least 20 recruits.