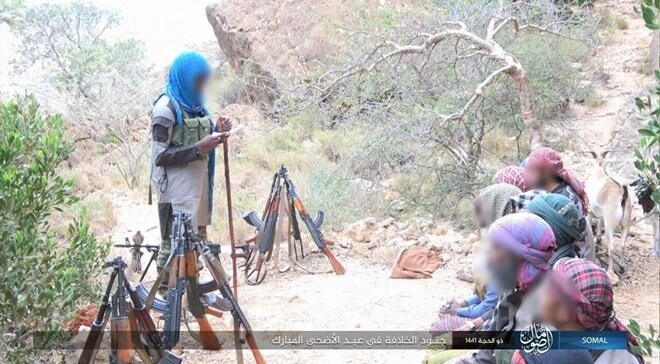 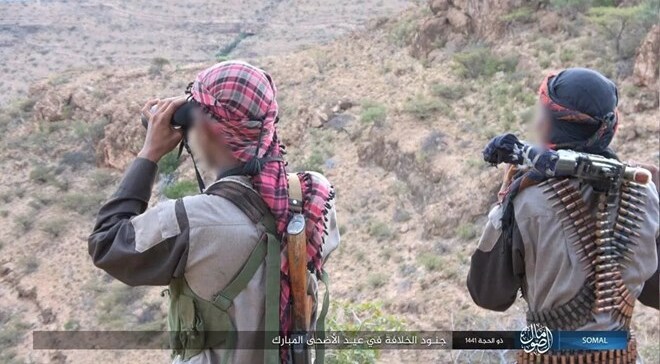 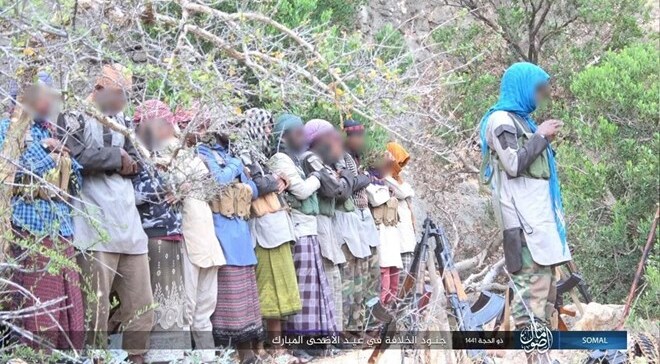 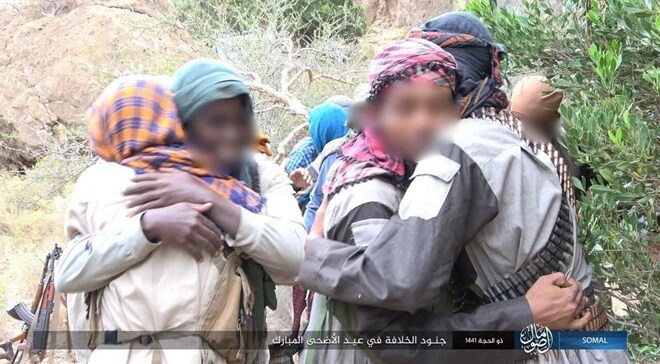 GAROWE, Puntland - The IS-Somalia militants have released photos of their fighters celebrating Eid-ul-Adha, one of the most respected holiday in the Islamic calendar, further showcasing their intentions to continue causing havoc in northern Somalia, a region which has been enjoying relative peace and stability.

IS-Somalia which swore allegiance to ISIS militants have been traced before I parts of Puntland, the northern federal state of Somalia, which has recorded few terrorism incidents in as many months, compared to southern part of the country which is under the control of Al-Shabaab militants.

And in their friendly media outlets, IS-Somalia published images of its fighters praying during Eid-ul-Adha, which was widely celebrated across the world. In recent years, the militants have not performed any open activity or at least released photos of that nature. Eid-ul-Adha is also known as Festivals of Sacrifice.

In the photos, goats are seen at the background and indication that the team slaughtered them during the celebrations. It's not clear how many fighters were present but from the photos, dozens of them would be seen praying, although their faces were partly blurred to hide their identity.

Donned in their official uniform, the fighters had AK 47 rifles on standby perhaps for security reasons. Their leader is also seen performing rituals or prayers, as the members keenly followed the progress. It is not immediately clear where the photos were taken but the militants are believed to be hiding in Golis mountains.

IS-Somalia is led by Abdulkadir Mumin, who is an ex-Alshabaab cleric who pledged allegiance to slain ISIS leader Al-Baghdadi in October 2015. The cleric was well respected within Al-Shabaab circles but it's not clear why he opted out of the group, which has links with Al-Qaida.

Coincidentally, the group released photos almost at the same time with Al-Shabaab, which also pictured their fighters celebrating Eid-ul-Adha in southern and central Somalia. Unlike IS-Somalia, the Al-Shabaab meetings had dozens of residents present.

The celebrations also come days after the US military launched first airstrike targeting IS-Somalia in Puntland, jointly with Puntland regional forces. The airstrike, IS-Somalia announced earlier this week, killed one of their senior foreign fighters from Pakistan.

After the operation in July 22, 2020, Puntland Security Forces confirmed the death of a "senior foreign fighter" but did not reveal details about the victim. In addition, the Puntland forces confirmed that over 20 militants were killed following an airstrike and subsequent ground combat.

However, in a separate statement, the US Africa Command said that it targeted remote area of Timirshe, located at least 140 kilometers southeast of Bosaso, killing seven militants in the process. It was the first airstrike in Puntland, despite the military carrying similar operations in southern part of the country.

He was one of active fighters of IS-Somalia and his death is believed to be a huge blow to the group. IS-Somalia has limited its activities to Puntland, but has often come under sharp attack from Puntland forces and a contingent of Somali National Army [SNA], which has been carrying operations in the region.

Some reports indicate that the group has serious fighters from both Yemen and Pakistan, who cross-over the border through the Red Sea and Indian Ocean. For the better part of 2017 and 2018, IS-Somalia launched several operations in Puntland before they were neutralised by the Al-Shabaab.

Rivalry between the two groups is informed by their conflicting ideologies. The SNA troops and regional security forces have been waging operations against both Al-Shabaab and IS-Somalia for the better part of 2020 ahead of implementation of Somali Transition Plan, which would see exit of Africa Union Mission troops from Somalia in 2021. 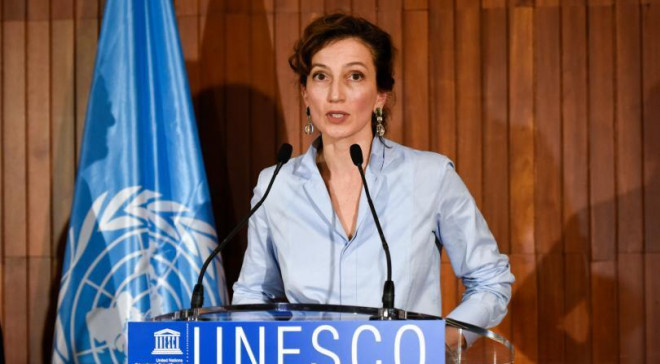