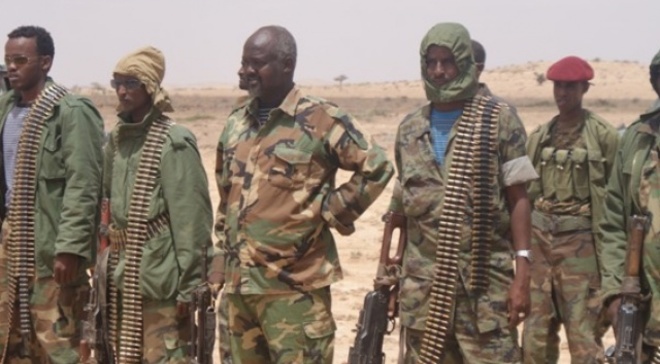 BOSSASO, Somalia-Two Puntland soldiers have been killed and three others wounded while defusing a mine planted in a field in restive Galgala on Wednesday, Garowe Online reports.

Puntland officials have not given public comments on the deadly landmine explosion as witnesses report of heavy clashes in southwestern Somalia.

More recently, two Puntland soldiers were targeted in a similar mine blast during a rain in Galgala where troops are battling Al Shabaab insurgents.

The landmine attack is said to be highlighting difficulties faced with soldiers in need of morale boosting. Battalions from Puntland Defence Forces are stationed in Galgala in pursuit of Al Shabaabmilitants with hideouts along Golis Mountain Ranges.

The fighting raged in El Waq and Anole areas, some 30km south of Gedo regional district of Bardera between Somali government forces and militants.

In Anole, no further details have been provided due to the tight secrecy of both sides and poor phone networks.

Somali government forces aided by African Union peacekeepers have so far dislodged militants from a string of strategic towns in central and southern Somalia.