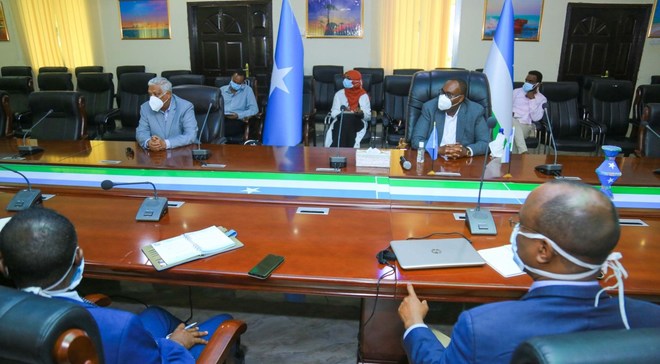 GAROWE, Puntland - Somali citizens in Puntland state will not be allowed to transact businesses in the evening, officials said, as authorities imposed a dusk-to-dawn curfew as a measure to curb the possible spread of Coronavirus.

This means, no human movements will be allowed in the evening, with those bound to violate the orders likely to face the wrath of the law as the COVID-19 pandemic' ripple effect becomes a reality.

By last week, Somalia had confirmed three positive cases of Coronavirus, with the latest victim being a UN employee who had been in self-quarantine for eight days, officials said.

Already, transport and aviation department has suspended both international and domestic flights indefinitely, in a move geared towards preventing mass infection throughout the war-torn nation.

From April. 1 this year, public transport, mass gatherings, weddings, and other public meetings will remain suspended in Puntland, a statement from the regional government confirmed, in a stringent measure that could wreck the economy.

Sporting events and mosques attendance will also be limited throughout the period as scientists race against time to find an appropriate vaccine for the COVID-19, Puntland said

To assert it's preparedness, the Garowe administration has allocated $100,000 as of the first financial package towards the fight of the virus. Also, tax sale was suspended to avert cases of inflation, the statement added.

Last week, the state received medical supplies which included face masks, ventilators, and test kits, which were part of the consignment delivered to the country by Alibaba Group under billionaire philanthropist Jack Ma.

With the public urged to observe various health guidelines such as washing hands and keeping social distance, security agencies were tasked to enforce the curfew as also part of tightening security.

This comes barely a few hours after Al-Shabaab suicide bomber detonated himself near a police station, in an attack which left Nugal governor dead and two others critically injured.

While acknowledging the threat of COVID-19, the UN Mission in Somalia said that "over the past weeks, has prepared to operate, medical and support procedures for the possibility of such an incident occurring".

The UN, through the local office of the World Health Organization [WHO], has been working with the Somali authorities to prepare the country’s health systems to contain and mitigate any outbreak of the pandemic in Somalia.

Puntland joins Kenya in the list of governments that have imposed a dusk-to-dawn curfew, in a bid to curb the spread of the virus. Nairobi's curfew was enforced on Friday, even though police were accused of brutality.

Until Sunday, the total positive cases around the world had surged to 650,000, of which, 136,000 had fully recovered. But 25,000 people have already succumbed to the virus, in which Italy is the most affected.

Somalia dispatched 20 medical doctors to Italy on Friday, who are expected to join hundreds of other medics in helping the European nation to fight the disease which WHO declared a pandemic.