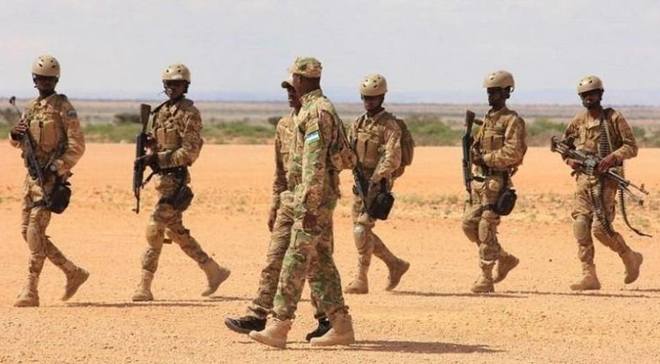 PIA soldiers in Garowe along with Galkayo-based units have seized control of Central Bank and Ministry of Finance buildings, in protest over unpaid salaries and lack of adequate support for injured soldiers receiving medical treatment abroad.

Close sources tell GO that striking PIA soldiers demanded their unpaid salaries and entitlements of over 7 months and proper assistance to soldiers who sustained injuries in the military operations against Al Shabaab militants group in Suj earlier this year.

In an attempt to resolve the situation, Senior Security officers intervened and held talks with the striking soldiers to end the crisis, but their efforts ended in failure.

PIA soldiers insisted that Puntland government must meet their demands before ending the seizure.

In response, Puntland government has formed a committee that will look into their demands, which prompted PIA soldiers to evacuate the building and ending the seize.

This is the second incident happening in less than 4 weeks after Puntland commandos have seized vehicles bound to Southern Somalia in protest over unpaid of salaries and lack of military support.

PIA has lost financial assistance from US counter-terrorism agencies in 2012, then-Puntland President Abdirahman Mohamed Farole has managed to secure UAE funding that continued till March, 2016.

Early reports have revealed that Puntland President Abdiweli Mohamed Ali has secured funds for PIA with possible downsize of the agency to 30 officers from 150 strong taskforce and civilian personnel, but plans yet to be accomplished.

Headquartered in the state capital, Garowe, PIA is mandated to conduct surveillance, neutralize threats posed to state security, and investigate suspects for links to terrorism.