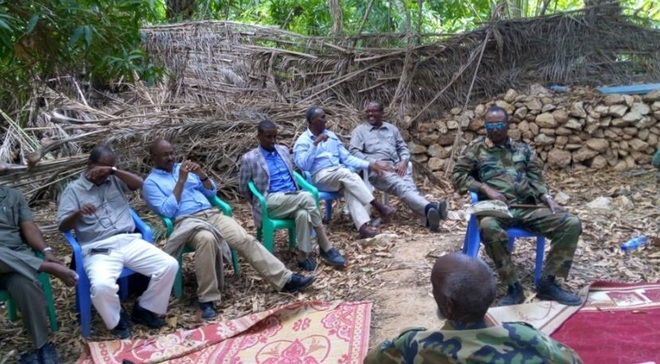 BOSASO, Puntland- Officials from Somalia’s semi-autonomous government of Puntalnd, have concluded a recent visit they made to military outposts in Bari region, Garowe Online reports.

Cabinet ministers who were among the delegate, have visited Afurur military outpost following the deadly attack carried out by al-Shabaab fighters against military forces that inflicted heavy losses by killing more than dozens and seriously wounding others.

The delegate also visited Galgala military outpost and stayed overnight with the forces before returning back to Bosaso city, the commercial hub of Puntland region on Saturday.

The aim of the visit was to assess the security situation and needs of the military forces as Puntland government has announced a major offensive against the terror group al-Shabaab.

Additionally, the delegate is scheduled to meet Bari region's officials to discuss on ways to strengthen security in the region that witnessed recurrent attacks by terrorist groups.

Among the delegate were Security Minister, Health Minister, Planning Minister, Livestock Minster and chief of the army forces General Said Mohamed Hiris and other security officials.

So far the government hasn’t released any statement regarding the outcomes of the assessment carried out by the delegate nominated by the President Abdiwali Mohamed Ali “Gaas” following June 8 attack.

Yesterday, al-Shabaab group has released the video showing the attack that was carried against the military forces in Afurur, which features scenes showing soldiers bodies and burning military vehicles while raising the group's flag.

The actual causalities of the attack is yet to be announced by Puntland government, which is believed to be the greatest single-day loss against terrorist elements in the history of Puntland region that was established in August 1998.