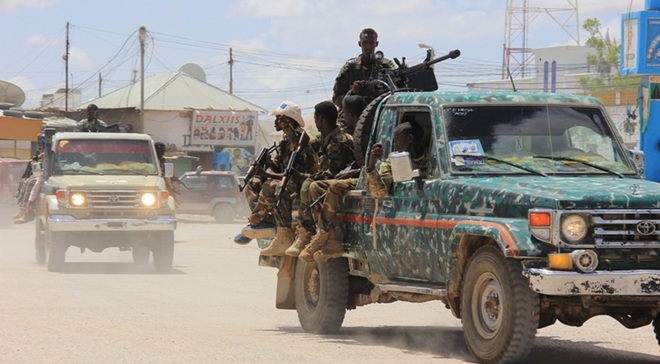 DHAHAR, Somalia-At least five soldiers have been killed after Puntland and Somaliland troops clashed in a deadly battle amidst the latter’s voter registration exercise in restive northern Sanaagregion on Monday, Garowe Online reports.

Puntland Member of Parliament Abdihakin Dhobadired unveiled that he cannot rule out deaths in Sanaag clashes at a press briefing. Locals were quoted as saying that technicals were alsoseized. Puntland Army Commander have confirmed that three soldiers on their side and two high ranking Somaliland military officers were killed.

He said, Puntland forces were in control of areas where the fighting erupted in the early hours of the day.

206 wards Saturday opened in Sanaag region and Somaliland Electoral Board asked residents to register and update their details on voter rolls ahead of 2017 presidential and parliamentary elections.

Somaliland Defence Minister Ahmed Haji Ali (Adami) has led a delegation of ministers, MPs and army majors to his stronghold Badhan by Sunday.

In a separate voter registration process, Fisheries Minister Ali Jama Bured is in Dhahar town in a sign for consolidating Somaliland presence in the strongly contested region.

Somaliland beefed up troops over the last few weeks despite warnings that such a military movement could trigger a “fresh flare-up”.

--‘VP to be questioned in parliament’

Omar will answer questions in parliament on Tuesday, said a 6-member parliamentary committee.

MPs were planning to grill President Abdiweli Mohamed Ali on his failed promise to restoreregions militarily seized by Somaliland.

Ali could not attend deliberations over Sanaag due to “urgently pressing issue of forming a city council for Galkayo”, an MP told reporters in front of parliament building in the state capital, Garowe.

“The government has really failed to give Sool and Sanaag regions a priority. They pledged this before us [during 2014 election campaign]. Nothing has progressed on this matter,” another MP seethed.

Fears of imminent clashes had already gripped residents of Badhan and Dhahar towns as Somaliland presses ahead with registration campaign.