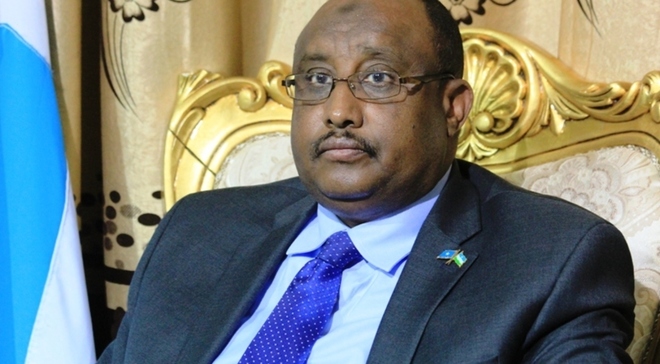 Speaking at a press conference held on Tuesday night at the Presidential Palace in Garowe, President Ali has criticized Somaliland for launching an invasion on Tukaraq in Sool region while President Farmajo in Puntland for an official visit.

He has described the move as a disruptive to the peace process.

The President indicated that Monday's attack was a "naked intervention" in Puntland's border, saying his government will not tolerate to the deeply provocative act aimed at threatening to the long-existing peace and stability in the region.

Ali has, on the other hand, accused Somaliland of supporting terrorists.

"As you're well aware, Puntland is currently at war with ISIL and Al-Shabab, and the naked incursion of Hargeisa administration helps and shields the terrorist groups," said President Ali during the press conference.

Meanwhile, Ali has called on the people of Puntland in the Country and abroad to be prepared for defending their land and protect the state borders.

Similarly, Puntland President called on the Federal Government of Somalia and the international community to carefully note that Somaliland will shoulder responsibilities regarding the aftermath of its aggressive actions.

This came after Somaliland forces launched an offensive against Puntland Defence forces, allowing it to capture the Tukaraq, a small town located approximately 86Km north of the State capital, Garowe on Monday, 8th January.

The takeover took place as President Farmajo and high-level delegates were in Garowe for the inauguration of the newly expanded and renovated city's Airport which has been given to the name of first Somali Police force commander, General Mohamed Abshir.

The State cabinet Ministers also held an extraordinary closed-door meeting at the Palace, in which they were reported to have discussed the renewed conflict in Sool region that caused tension between the two neighbouring states.

Puntland and Somaliland have had territorial disputes over the Sool and Sanag regions for years, in which some occasions troops from both sides clashed.