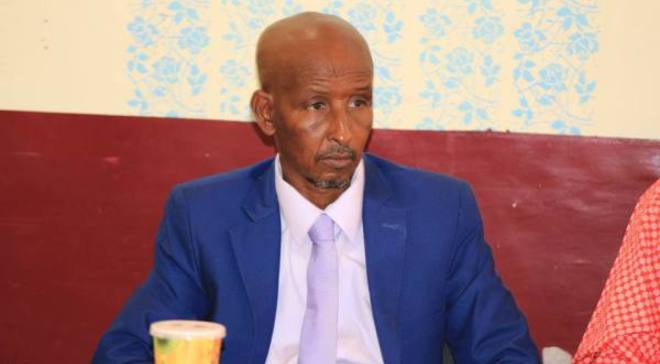 GAROWE, Puntland - The governor of Nugal region Abdisalam Hassan Hersi [Gu'jir] has succumbed to his serious wounds following a suicide explosion at a police station on Sunday evening, witnesses said, in a surprise attack in Garowe, Puntland capital.

Also badly wounded were a soldier and former regional police commander Farah Galangoli, and the two, who were critically injured following the blast, have since been hospitalized at Garowe General Hospital, officials said.

"A man wearing a suicide vest walked closer to the car carrying the officials on foot and then detonated himself, dismembering the vehicle completely just near a police station," a witness said.

It's not clear whether the bomber was targeting the governor or the former police official, but it was the first suspected terrorists attack in five years within Garowe, one of the safest cities in Somalia.

Doctors are currently working around the clock to save the lives of those wounded in the attack, reports indicate.

Al-Shabaab has immediately taken responsibility for the attack. The Somalia-based Al-Qaida associated group has often targeted security officials, political leaders, and even civilians.

Puntland is one of the most progressive and safest states in Somalia and is traditionally associated with a formidable security force, which has managed to keep militant groups at bay.

But there have been few reports of IS-Somalia in the northern part of the state, especially in Goli mountains, although the group is almost dysfunctional. Intelligence reports intimated the militants' frosty relationship with Al-Shabaab, which led to its extinction.

Al-Shabaab has been the most dominant terror group in Somalia, with a huge presence in central and southern parts of the country, where it has continued to recruit and train members with impunity, AFRICOM said recently.

While its activities have been almost neutralized by security forces, the group has, however, managed to execute both small and large scale sporadic attacks in major towns, targeting security forces and foreigners.

The last notable attack took place last week in a restaurant near Parliament Buildings in Mogadishu, where a suicide bomber in a vest detonated himself, killing three other civilians, police said.

Also, the militants claimed responsibility following the death of Ras Kamboni Governor Abdullahi Diriye, whose died instantly will three others in Lower Jubba when his vehicle drove through a landmine last week.

Sunday's attack comes at the time Puntland President Said Deni is advocating for dialogue between FGS and Federal states, whose relationship has substantially dwindled.

Besides the controversial electoral and petroleum laws, Deni said, the federal states are pushing for a Consultative Forum with Mogadishu to discuss "viable options" towards the elimination of Al-Shabaab militants.

President Mohamed Abdullahi Farmajo has been under fire from the opposition, which has termed his attitude towards Al-Shabaab war as "wanting" with some lambasting him as the militants' sympathizer.

The group has caused havoc in East Africa with their long term plan being toppling the fragile UN-backed administration, and it has managed to kill over 4,000 civilians in the last decade, statistics from UN indicate.

But the militants have lost strategic towns to SNA and AMISOM troops especially in the southern part, where the US forces have often targeted their hideouts through persistent airstrikes.