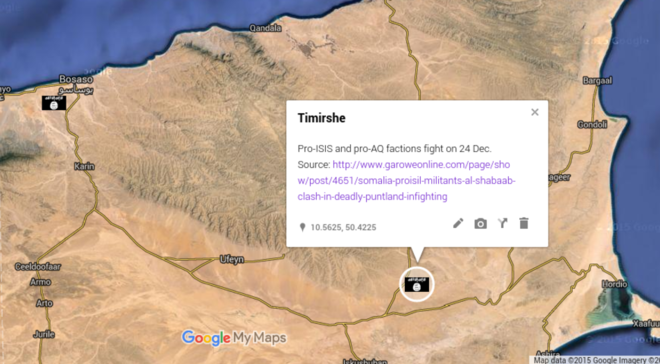 BOSASO, Puntland - Warplanes thought to be belonging to US military have carried out air raids on positions of pro-Islamic State faction and Al-Shabab in the northeast of Somalia, Garowe Online reports.

Friday's airstrikes struck two hideouts of terror groups in the vicinity of Timirshe, a mountainous area near Isku-Shuban district of Bari region in Puntland state, according to the sources.

The source who did not want to be identified said the jets fired six missiles, 4 of them at ISIL base while the two others were targeted an estimated 200 Al-Shabab fighters at water wells in a nearby location.

The locality has been the scene of recent clashes between the two groups who are fighting for control as they face intensified military offensives from Puntland defence forces and US military.

There were conflicting reports of the casualty numbers in Friday’s raid in Puntland. A local resident said several militants were killed, however, the exact figures have not yet been verified.

It was not immediately clear which country belongs to the jets carried out the airstrikes, but, the US military involvement in Somalia has grown since Trump approved expanded operations in early 2017.

The US military killed Abdulhakim Dhoqob, deputy leader of the Islamic State group in Somalia on April 14, 2019, after his vehicle was hit by airstrike outside the village of Hiriiro in Bari region.

According to the U.N., Dhoqob helped set up the first cell of al-Ittihad al-Islamiya, an ideological predecessor of al-Shabab, a militant group that has been fighting the government in the Horn of Africa nation for over a decade.

He later defected to ISIS.

In its latest report, Amnesty International expressed concern about “the rising number of civilian casualties from the US airstrikes in the long-chaotic Horn of Africa country in recent years.