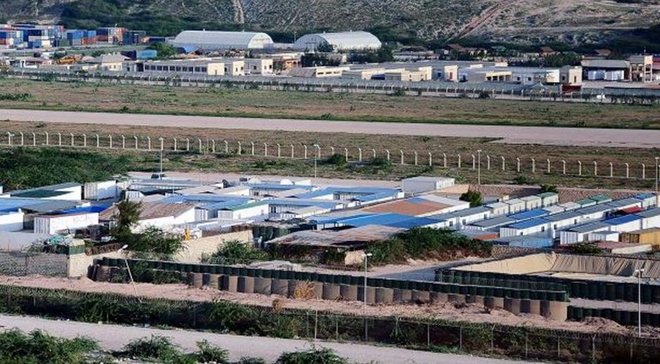 Although AMISOM has remained tight-lipped about the assault, multiple sources told Garowe Online that there were casualties, although the number could not be immediately ascertained.

So strategic is the base, that it neighbors Aden Abdulle International Airport. Cases of the attacks in the camp are synonymous, with a number of them often linked to rivalry among security forces.

On March 1st this year, a similar attack was waged in the camp, leaving one foreigner critically injured, officials said. In October 2019, three foreigners were also injured when Al-Shabaab fired at the base.

Lt. Col. Charles Okongo, the AMISOM spokesman, had last year warned that the mission will not be deterred from protecting innocent civilians, following the attack at the Basecamp.

"The attack by al-Shabaab will not diminish AMISOM’s resolve to carry out its important mandate to drive out the terrorists and bring lasting peace and security to Somalia," he had said.

On one of their affiliate website, the Al-Shabaab took responsibility, insisting that "foreigners are the greatest impedance to Somalia's growth, we shall seize available opportunities and raid them".

However, the Al-Qaida linked group did not immediately reveal their main target. The attack comes barely a week after Ahmed Omar Diriye, the Al-Shabaab leader, reportedly took charge of explosives brigade in Mogadishu, following the death of Muse Moalim, who was killed by the militants in Saakow after defection.

Fundamentally, on Monday, AU forces played a critical role in the liberation of the agricultural town of Janaale in Lower Shebelle, a reason which could have informed the latest attempt in Halane.

Lt. Gen. Tigabu Yilma, the AU Force Commander, termed the liberation as "the most important success" in AMISOM's crackdown against the militants. SNA troops also played a role in the victory.

Currently, there are about 22,000 AMISOM troops in Somalia, whose stint is set to elapse in 2021. Already, 1,000 troops are set to leave the country by March this year, as the exit strategy before handing over responsibilities to SNA.

The US recently described Al-Shabaab as a "dangerous group" capable of expanding, despite the fact that it has considerably lost some of its territories in central and southern Somalia.

Last month, the US Africa Command announced the death of Bashir Qorgab, a wanted militant who reportedly waged Al-Shabaab attack at US Naval Base in Kenya. The Manda Airfield raid left three Americans dead, officials said.

Christopher Anzalone, an Islamic scholar, believes Al-Shabaab's attempt at the highly secured base is a manifestation that the group can execute small to large scale attacks in the capital, Mogadishu.

"As with all of its attacks targeting Halane, Al-Shabab made a lot of hay about the presence of AMISOM, the UN, and other international organizations because it demonstrates the insurgents' ability to carry out a variety of small to large-scale attacks in the capital at will,' he tweeted.

There are about 7,000 active Al-Shabaab fighters in Somalia according to US Africa Command. A number of them have recently scampered for their safety to urban centers due to drone strikes in remote villages, officials said.