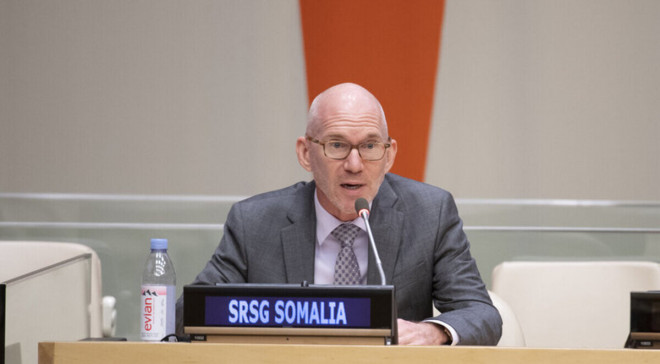 MOGADISHU, Somalia - The United Nations insists that the Al-Shabaab militants still remain a major threat towards the ongoing process of promoting peace, stability, and development in Somalia, due to the fact that they can wage small to large scale sporadic attacks.

Al-Shabaab pledged allegiance to Al-Qaida and since then, they have been waging serious attacks against members of the security forces, senior government officials, and at times, innocent civilians.

In his briefing to the United Nations Security Council [UNSC] on Tuesday, the UN special envoy to Somalia James Swan noted that the group still has the ability to launch complex attacks in the country, adding that there is a need to degrade them further.

"The security situation continues to be of grave concern. Al-Shabaab remains a serious threat manifesting the ability to plan and execute complex attacks on a range of targets across Somalia. Recent incidents are outlined in greater detail in the latest report of the Secretary-General," he said.

"Suffice it to say that Al-Shabaab has demonstrated both initiative and resilience in recent months. The operations of the Somali Security Forces and AMISOM, therefore, remain crucial in maintaining the pressure on this group," Swan added.

The combined military efforts have however yielded fruits, Swan noted, while lauding the contributions by the AU Mission Forces [AMISOM] who have managed to liberate several towns in the country, which were previously under Al-Shabaab.

With the expected withdrawal of AMISOM troops approaching faster, Swan noted that implementation of the Somali Transition Plan [STP] has been slowed down due to the current electoral impasse, which has also disoriented operations in the country.

"Some progress has been made in the implementation of the revised Somalia Transition Plan. Key developments include the handover of forwarding Operating Bases in Awdheegle and Barire to the Somali National Army near the end of 2020. In early April, these FOBs came under attack by Al-Shabaab, but Somali forces displayed great courage and held their ground," he said.

"The pace of implementation of the Somalia Transition Plan has been impacted by the ongoing political impasse. Major commitments are behind schedule, and significant efforts will be needed to accelerate progress."

AMISOM's mandate was extended to December 31, 2021, by the African Union Peace Council which has been making follow-ups on the progress in restoring peace in Somalia. It's also expected that by that time, Somali National Army would have assumed most of the security responsibilities.