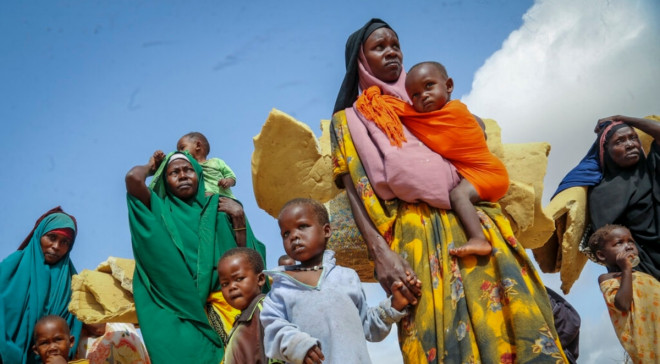 FILE - Somalis who fled drought-stricken areas carry their belongings as they arrive at a makeshift camp for the displaced on the outskirts of Mogadishu, Somalia, on June 30, 2022.

MOGADISHU, Somalia - Thousands of Somalis are fleeing to neighboring countries following escalating drought which has triggered an acute food shortage, the United Nations has noted while appealing to the world to chip in and assist the Horn of Africa nation.

Most of those who have fled have settled in Kenya mainly in Dadaab Refugee Camp, which has been in existence for over three decades. Kenya has been hosting thousands of refugees from the country, some of who are victims of war.

But despite getting hosted in foreign countries, reports indicate, the refugees are yet to receive assistance from UN humanitarian organizations. Most of them do not have refugee cards or food ration cards according to officials who are in the know-how.

Amina Hassan, a farmer, fled the town of Jilib in southern Somalia for Kenya last month. The mother of six said she has been to the registration center multiple times but has yet to be accepted as a refugee. She said she has no food to cook for her family, Voice of America reports.

For the last six years, Kenya has stopped issuing refugee registration cards and has been threatening to close the camps. In various communications, the government has been claiming that the camps are used as breeding cells for Al-Shabaab militants.

A number of those fleeing from the country come from Juba regions where the Al-Shabaab militants have been dominant. Somalia and its allies have launched a series of operations against Al-Shabaab in the last couple of months which have borne fruits.

Faith Kasina, U.N. refugee agency spokesperson for Eastern Africa, the Horn of Africa, and the Great Lakes region, said the aid agency supports more than 185,000 people in Somalia and those who crossed the border to other countries in the region.

"In the counties that Somalis are also moving into, we're similarly supporting them through shelter and hygiene," she said in an interview.

"[we are] essentially ensuring that they have all the necessary support for their lives to be saved as we continue appealing for additional funding to ensure that they are supported to move from the humanitarian stage of this response to more livelihood-oriented activities that will ensure that they are able to earn an income when conditions allow and rely on themselves."

During United Nations General Assembly meeting in New York City, Somali President Hassan Sheikh Mohamud asked the world to help the country tackle effects of drought besides calling for help in the fight against Al-Shabaab militants who control large swathes of rural central and southern Somalia.