Amid reduction of forces, AU troops intensify crackdown against Al-Shabaab in Somalia 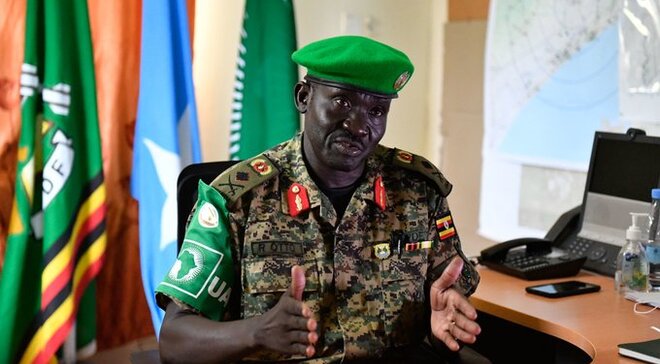 MOGADISHU, Somalia - The Africa Union Mission troops have intensified crackdown against Al-Shabaab militants in Somalia, despite the recent reduction of troops and the raging Coronavirus pandemic, which had been projected to significantly affect operations and execution of the mission's mandate in the Horn of Africa nation.

As part of the Somalia Transition Plan, the mission withdrew 1,000 soldiers from Somalia in March, a move which many critics said would impair operations against the militants. AMISOM has close to 22,000 soldiers and police in Somalia selected from among contributing nations such as Ethiopia, Kenya, and Uganda.

Brig. Richard Otto, the commanding officer Sector I, said the two prevailing conditions have not sabotaged operations across the war-torn nation, adding that the reduction of troops was in line with advisory from the United Nations Security Council. The Ugandan troops' man Sector I in Lower Shebelle and Mogadishu.

To combat the spread of COVID-19, AMISOM troops put on hold regular rotation of her troops, but Otto insists the move has not affected operations in Somalia. In April, AMISOM announced that at least nine UPDF troops had contracted the novel COVID-19.

“I have troops who were supposed to rotate out but have not because of this situation. Most of the countries have restricted their airspaces and border posts, but this is aimed at protecting and controlling the spread of the disease from other countries. My troops have been informed and they are aware. It has not affected their morale,” Gen. Otto said.

According to the commanding officer, the troops have continued to unleash against Al-Shabaab in coordination with the Somali National Army [SNA] and other allied forces. It is the Lower Shebelle region which has witnessed sophisticated operations in recent weeks, leading to the death of several militants.

Gen. Otto was speaking at Sector I headquarters in Mogadishu on Saturday where he noted major operations that led to the capture of strategic towns among them Janaale in Lower Shebelle, which fell to the government forces in March this year and had a major mention at a UNSC meeting report in June.

The liberation of the town, he added, had dealt a huge blow to Al Shabaab, denying the militants freedom of movement and operation, and seriously curtailing their ability to wage war. SNA troops have since taken over the town and are restoring law and order by introducing the civilian rule.

“When we captured Janaale, we found a big local factory for manufacturing Improvised Explosive Devices (IEDs). Since Janaale was captured by AMISOM, the situation has changed completely because Al-Shabaab is no longer free to cross River Shabelle from the northern part and come to the southern part because that was the only bridge town remaining on the River Shabelle under the militants,” he said.

Following a string of defeats, Gen. Otto said, the Al-Shabaab has now resorted to using IEDs and shelling mortars, which have often landed in population centers and caused harm to innocent civilians.

“Al-Shabaab has lost ground; they don’t have a particular area where you will go and find Al-Shabaab only. They always hide within the population. They use mortars to shell the population,” the veteran commander said. He said that a key factor in the fight against Al Shabaab has been the increasing capabilities of the Somali National Army, as seen by the SNA’s capacity to fight and hold ground.

The increasing role of SNA, he added, is in line with the revised AMISOM Concept of Operations [CONOPS 2018-2021] and is also guided by the Somalia Transition Plan [STP].

The Somalia Transition Plan is a comprehensive guide developed by the Federal Government of Somalia and its partners for the transfer of security responsibility to Somali National Security Forces ahead of AMISOM’s anticipated exit from the country.

“So with SNA, we are happy that they are now strong enough, especially in holding some of the liberated areas, like the towns which were captured last year. They are now under the Somali National Army,” the UPDF general said.