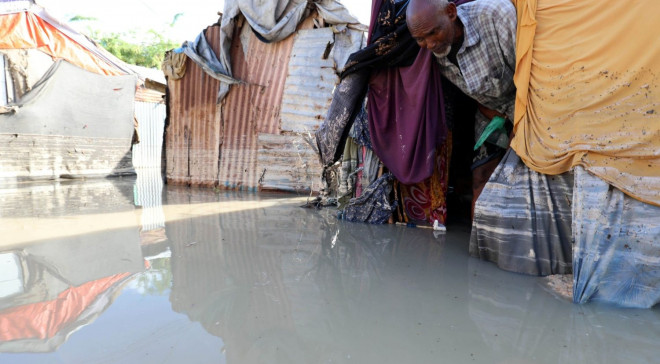 MOGADISHU, Somalia - A total of 15 people have been killed across Somalia following a heavy downpour, authorities said, even as the Food and Agricultural Organization [FAO] warned of dire consequences, including but not limited to mass displacement of people.

Reports compiled by an aid organization indicate at least nine children were killed Friday when a house collapsed after heavy rains here in the capital. This is the worst catastrophe resulting from rains in recent years according to reports.

The children were rushed to hospitals but died from their injuries, said the Somali Red Crescent society. Most of those who died were from the same family, the organization added in a statement.

"Sadly 9 children rushed to hospital following the collapse of a house in Mogadishu have succumbed to their injuries. Heavy rains have caused flash floods and structural damage in the Bulo-hubey neighborhood of Wadajir district in Mogadishu," the Director of Organizational Development and Communications for the Somali Red Crescent Society, Abdulkadir Afi, said on Twitter.

"Rescue efforts ongoing and our Somali RC ambulances continue to attend to the wounded," he added.

Five of the children, all under 10 years old, were from the same family. Mogadishu has seen hours-long heavy rain and terrestrial rain is expected across the country, even as political tensions also continue to boil within the capital.

On Saturday, six people, four of them from the same family died after an old wall collapsed on makeshift shelters for displaced people in the Garasbaley area on the outskirts of Mogadishu, taking the death toll from Friday night heavy rains at 15, mostly children.

There are hundreds of Internally Displaced Persons in Mogadishu, most of them of who has run away from the Al-Shabaab menace, clan militia and, or catastrophes such as floods which are synonymous in the country during heavy rains.

In a statement, FAO warned that the number of displaced persons could reach 200,000, adding that it's anticipated that River Shabelle would break banks due to ongoing heavy downpour in the country.

"New Somalia Gu 2021 Rainfall Forecast Rainfall expected to be lower than average in NW regions, above average in parts of NE regions while the rest of the country have equal chances of average, below average, and above average," the global body said on Twitter.