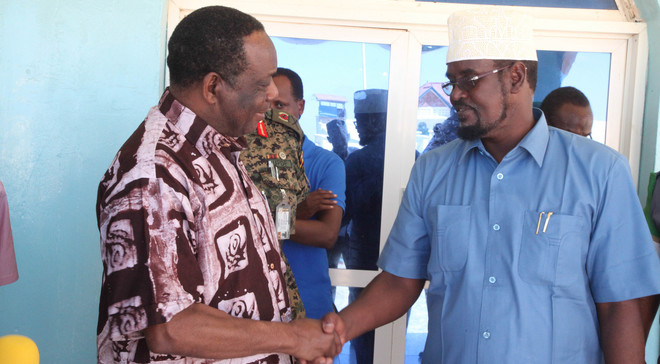 MOGADISHU, Somalia - A senior African Union envoy in Somalia held talks with Ahmed Mohamed Madobe, president of the Jubbaland State of Somalia, on the upcoming elections and planned security operations to secure the main supply routes in the southern region.

Francisco Madeira, special representative of the Chairperson of the African Union Commission for Somalia and also head of African Union Mission in Somalia (AMISOM) expressed optimism that the August elections were going to be free, fair, peaceful, and transparent.

"I assured President Madobe of the availability of AMISOM to support the holding of peaceful elections. We will not interfere in the elections. Our mission is to empower the Somalis in all aspects so that they eventually take charge of their own security," Madeira said in a statement issued in Mogadishu.

He said that contrary to reports that AMISOM troops had withdrawn from securing Kismayo Airport, the troops were in place and the airport was secure.

During the meeting, Madobe said his administration was happy to work jointly with AMISOM to conduct free, fair and peaceful elections and he had appointed a team of local officials to ensure that the August election was delivered as planned.

"We discussed the upcoming elections in Jubbaland, and the need to hold them in a free, fair, and peaceful environment. We agreed that the Jubbaland Security Forces are capable of securing the elections," Madobe said in a statement issued by the AU mission.

He also revealed that discussions with Madeira had focused on the resumption of joint operations to secure the Kismayo-Afmadow road and the Kambsuma road by conducting regular patrols and escorting vehicles carrying humanitarian relief aid.

AMISOM promised to continue supporting the transition through the priority tasks including securing main supply routes and key population centers.