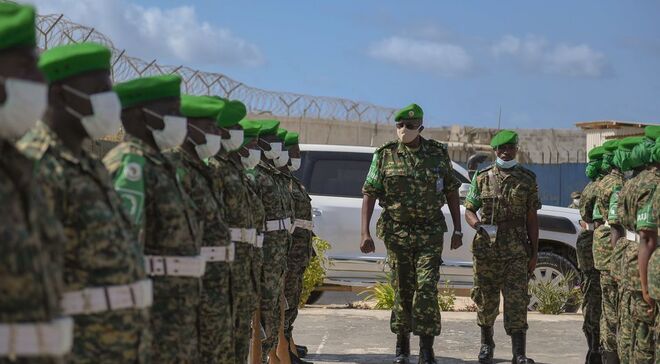 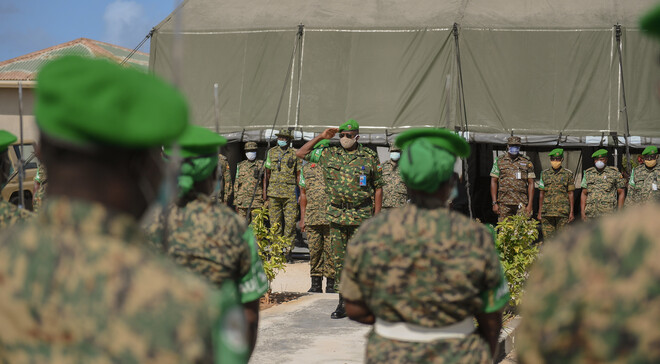 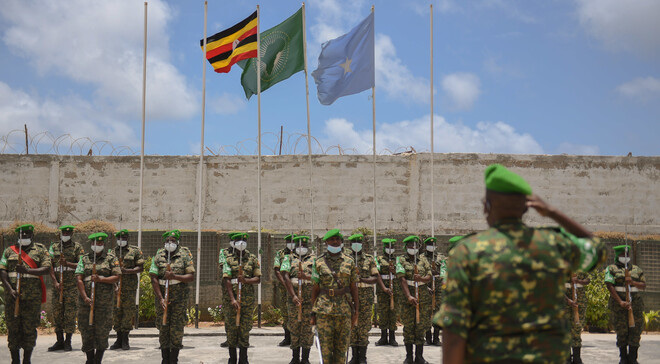 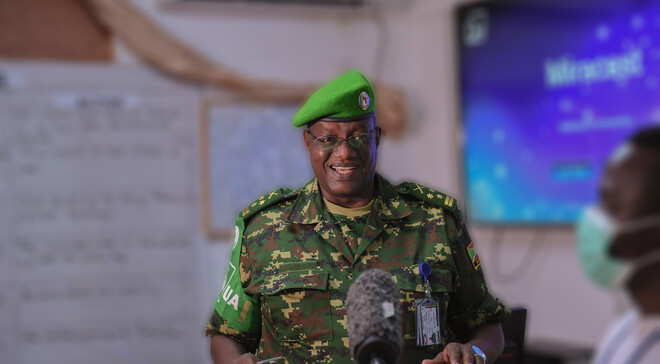 MOGADISHU, Somalia - The new AU Force Commander in Somalia Lt. General Diomede Ndegeya has hailed the Ugandan People's Defense Forces [UPDF] for significant achievements ever since landing in Somalia, adding that their sacrifices are worth noting as the Horn of Africa nation gears for sustainable stability.

For decades, Somalia has been battling growing violent extremism which is aided by the emergence of Al-Shabaab militants and the IS-Somalia, forcing the African Union to dispatch peacekeeping mission troops in a bid to restore normalcy in the country.

And in his familiarisation trip to Sector I in Somalia, Gen. Diomede hailed the UPDF troops for the resilient in the fight against Al-Shabaab, noting several gains including the famous capture of Mogadishu, the Somali capital which was literally the home of the Al-Qaida linked group.

Mogadishu fell into loyal forces in 2011 after about four years of battle and the militants had to scamper for safety in the rural areas of the country. Uganda was the first to deploy troops to Somalia in 2007 and has since contributed immensely to a number of gains the mission has made against the Al-Shabaab.

“As the first contingent to have deployed in Somalia, UPDF is praised for bringing home the most significant victories for Somalia, AMISOM, Africa, and the world. Together with the Burundian National Defense Forces who later joined, you both successfully liberated Mogadishu in 2011. This is a huge feat that will always be remembered whenever AMISOM is mentioned,” he said.

Lt. General Ndegeya said Ugandan troops have since the 2011 showdown brought many more victories to Somalia, including the capture of Afgoye, Marka, Barawe, Qoryoole, and other key bridge towns in the Lower Shabelle region liberated recently.

He said the capture in March of Janaale, in particular, stands out as a recent significant triumph because the bridge town was very strategic for the Al Shabaab, and that their losing it weakened them. The agricultural-rich town was being used as the headquarters of the Al-Shabaab revenue collection team.

The Force Commander however warned that these victories did not come on a silver platter, and together with the AMISOM commander present he led a moment of silence in honor of the fallen heroes and heroines whose sacrifice has made it possible for the Federal Government of Somalia to function.

“I have nothing new to tell you, except that victory is near. So, let us redouble our efforts and tirelessly continue to work to liberate this great African country, Somalia,” Lt. Gen Ndegeya said.

Despite the victories, the UPDF team has been under persistent attack from the militants but in the recent past, a number of them have been successfully foiled. Ndegeya took over from Lt. General Tigabu Yilma, an Ethiopian whose tenure elapsed in August. The new officer comes from Burundi.

AMISOM is set to leave Somalia in 2021 under the Somali Transition Plan [STP] which will among others, ensure the SNA troops are adequately trained. Other force contributing nations include Kenya, Ethiopia, Burundi, and Djibouti and there is a total of close to 22,000 active AU forces in Somalia.