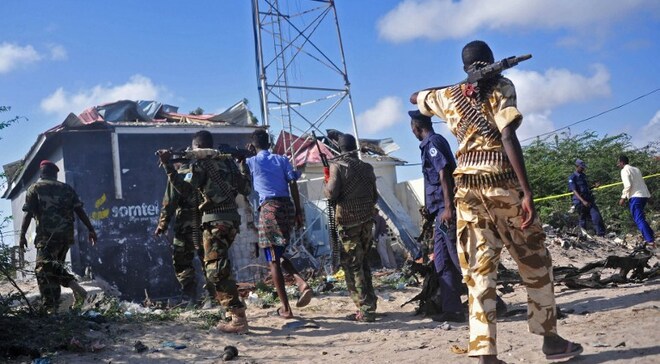 MOGADISHU, Somalia - A bomb blast in the outskirts of Dhusamareb, the regional administrative capital of Galmadug, left two government soldiers dead and several others injured on Tuesday, senior officials said, amid an ongoing crackdown against Al-Shabaab militants.

The government forces have been unleashing on the military for the last couple of years but the operation was intensified since March, with the Somali National Army [SNA] keen to assert her authority on administrative matters before the exit of foreign troops from Somalia.

Currently, there are close to 22,000 African Union Mission Forces in Somalia within an additional 600 from the US Africa Command, who have been helping to counter Al-Shabaab and other organized militants in the country. The troops are scheduled to leave by the end of 2022.

According to eyewitnesses, a military vehicle ran over a landmine at Sinadaqo near Dhusamareb, leaving two soldiers dead. Nine others suffered immense injuries and have since been taken to hospital where they are recuperating, sources said.

But a vigilant security team has been guarding areas surrounding the strategic town in central Somalia. It's just in September that President Mohamed Abdullahi Farmajo renamed the town Samareeb following efforts to strike a pre-election deal ahead of much-anticipated elections.

Until now, no group has taken responsibility for the latest attack but Al-Shabaab militants are synonymous with such kind of onslaught. The group still controls large swathes of rural central and southern Somalia, but have been significantly degraded following multiple operations by security forces.

The Federal Government of Somalia is keen to eliminate the terror group which is believed to have infiltrated various government departments. Al-Shabaab swore allegiance to the Al-Qaeda network in 2012 and since then, they have executed numerous dangerous attacks in the country.