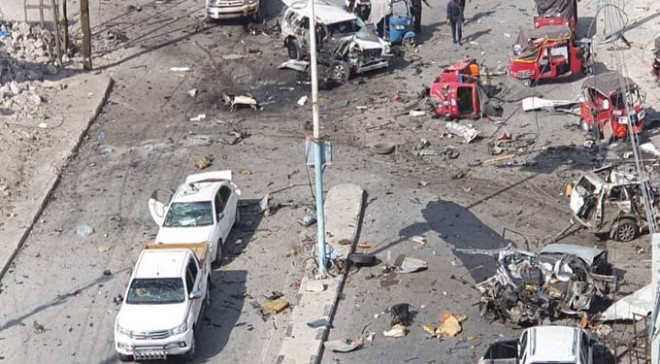 MOGADISHU, Somalia - A powerful explosion was heard on Saturday morning at 9 am local time around the Somali parliament compound in Mogadishu, causing casualties.

Eyewitnesses say the explosion took place after a car laden with explosives at the main security checkpoint to the parliament building located in the vicinity of Sayidka junction.

The police have fended off the sleeping vehicle-borne improvised explosive device (VBIED) to pass through the checkpoint to the city's green zone during the morning rush hour.

The bomber who drove the car died in the blast and seven civilians sustained wounds, according to a statement released by Somali police.

The area was cordoned off by security forces and the ambulances rushed the wounded to the hospitals for treatment.

Somali capital has seen increasing attacks since the start of this year after the term of the current government expired with no election to pick a replacement due to the political crisis over the electoral process.

Early this month, Al-Shabaab attackers stormed the Afrik hotel in the main street to the airport and killed at least 11 people, including a retired military general during an 8-hour-long siege.