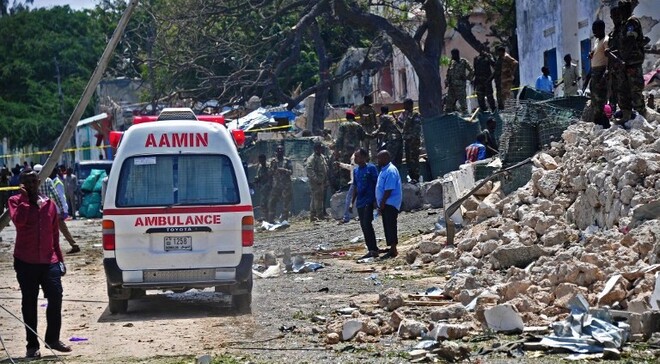 At Ba'adweyn town in Central Somalia, a suicide car bomber detonated an explosive-laden vehicle near the gate of a military base, killing several soldiers who were guarding the premises at the time of the attack.

Multiple eyewitnesses told Garowe Online that the attackers detonated the explosive before opening fire, in a confrontation that lasted for several hours on Sunday morning. A Somali police officer who spoke in confidence said several soldiers died during the incident.

"I can confirm that already several army officers have been killed, the suicide bomber detonated the car outside the gate where a number of our colleagues were manning leaving quite a number of the dead," he said in a message, adding that rescue efforts were ongoing.

The town is located around 170 kilometers Southeast of Galkayo town, which is found in fragile Mudug region near the border of Galmadug and Puntland federal states of Somalia. The vehicle, he added, had temporarily stopped at the gate in compliance with army protocols.

According to the officer, the attackers have since left fled from the scene following a swift response from a number of soldiers inside the base, who opened fire forcing the militants to scamper for their safety in the surrounding efforts.

Those injured, he noted, have been evacuated to local hospitals for emergency treatment and some could be airlifted to the capital, Mogadishu for advanced treatment. The number of the soldiers killed could not be established immediately but the officer termed it "quite devastating".

Incidentally, the attack comes barely 24 hours after three senior Al-Shabaab commanders surrendered to Somali National Army in the Mudug region, which has been turned to a battlefield between the government forces and Al-Qaida linked group; Al-Shabaab, who are fighting to topple the fragile UN-backed Somalia government.

Abdiaziz Abdullahi Abdi, the commander 21st battalion of SNA, told reporters that the three will be repatriated successfully. According to him, the government is using an amnesty signed in 2014 to receive defectors without discrimination.

Separately, at least 12 people were killed in Wanlaweyn town on Saturday night, officials said, following an IED explosion that targeted the residence of a senior SNA commander within the Lower Shebelle region.

Most of those who died had gathered outside the residence of the senior army officers after the first explosion before the second deadly explosion happened, eyewitnesses said. Over 20 civilians were also injured during the melee.

According to reports, some of the badly wounded civilians have been taken to nearby AMISOM bases for emergency treatment. It's not clear why the militants targeted the commander, but attacks against military officers are common in Somalia.

For the last couple of months, the SNA troops in collaboration with African Union Mission soldiers and those from US Africa Command have been leading operations in central and southern Somalia, targeting the notorious Al-Shabaab militants.

In that process, several towns have been liberated including the agricultural-rich Janaale, which was captured from the militants in March this year. In response, the Al-Shabaab have continuously targeted military bases using explosives.

Although most of their raids have often been repulsed by security forces, the militants managed to overrun an SNA base at El-Salini in February this year. At least 25 soldiers died on the spot according to police reports.

No group is yet to take responsibility for the attacks in Ba'adweyn and Wanlaweyn respectively, but the Al-Shabaab militants usually execute their attacks using a similar version. The group normally uses proxy media outlets to claim responsibility.

In recent weeks, the Al-Shabaab has continued to lose traditional strongholds to government forces. A number of fighters have renounced their extremism ideologies, further weakening the group, which has literally wreaked havoc in the Horn of Africa nation.