Dhusamareeb talks set to kick off after arrival of stakeholders 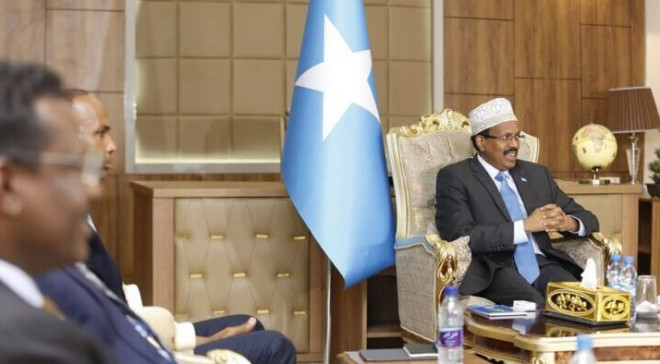 MOGADISHU, Somalia - The pre-election crisis talks in Somalia are set to kick off today [Wednesday] following the arrival of all stakeholders who had been invited by President Mohamed Abdullahi Farmajo, whose term is set to expire on February 8, when the country is set to go for an election.

On Monday, President Farmajo and Prime Minister Mohamed Hussein Roble were the first to arrive in Dhusamareeb, the regional administrative capital of Galmadug, where they held talks with regional leader Ahmed Kariye alias Qoor-Qoor.

There was anxiety after Al-Shabaab militants fired mortar shells in the town on Monday night injuring four people, but security has since been beefed up following the deployment of more troops. It's not clear why Al-Shabaab targeted the rather quiet town.

On Tuesday, Puntland President Said Abdullahi Deni, who has been a major critic of Farmajo's administration, also arrived at Dhusamareeb after taking a road trip from Adado.

Sources told Garowe Online this was taken as a "security precaution" to protect against possible danger after mortars were fired at Dhusamareb airport on Monday night.

Among others, they are set to discuss the composition of the federal electoral committee which has raised concerns among stakeholders. Farmajo is accused of plotting to rig elections by picking his loyalists, civil servants, and NISA agents, a move that has been opposed by a number of opposition leaders.

Senate Speaker Abdi Hashi had expressed interest in attending the conference but it seems his efforts did not yield fruits. Hashi wants powers to pick the Somaliland electoral committee, a function which the federal government of Somalia had assumed.

Ex-president Sharif Ahmed who was accompanied by Senator Ilyas Ali Hassan paid a courtesy call on the Speaker of the Upper House of the Somali Parliament Abdi Hashi in Mogadishu Tuesday. It's not clear what the three leaders discussed.