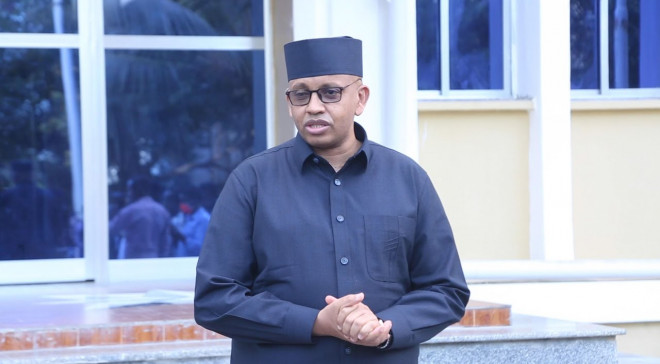 MOGADISHU, Somalia - Somalia's Information Minister Osman Abukar Dubbe has been dragged to the missing young soldiers, who are presumably training in Eritrea, despite the government remaining noncommittal in explaining their whereabouts.

Investigations done by Garowe Online have established that close to 5,000 young soldiers were smuggled to Eritrea in 2019 for training, with reports revealing they had been promised to be taken to Qatar. They were taken to Eritrea in three batches.

And the matter is now becoming a topical issue in Somalia, following reports that the soldiers could have fought in the Tigray war, which has been widely condemned by members of the international community. The UN Special Rapporteur to Eritrea made the findings in his report.

In a video that has widely circulated on social media, Osman Abukar Dubbe, the information minister, is condemned by a mother to one of the recruits, during an interview with the BBC Somali Service. According to her, it is wrong for the minister to link them to the opposition.

Previously statements made by the minister, point an accusing finger at the opposition for allegedly "misusing" the mothers. A number of these parents have staged demonstrations in Somalia, demanding to know the whereabouts of their children.

But according to the woman, her plight has nothing to do with the opposition and government, adding that "I am just a small person selling vegetables to make ends meet". She asks the information minister to desist from "distortion of information to our detriment".

The woman further demands to know the whereabouts of her child who she says that "I wasn't even told when they left, we just learned months later". She's among hundreds of parents seeking similar answers from the administration of President Mohamed Abdullahi Farmajo.

Last week, Dubbe accused politicians of politicizing training in Eritrea, arguing that such incidents deserve "supreme national secrecy". He insisted that continued engagement in the matter was "pretty dangerous" and had the potential of risking the country's national security interests.

"In many countries, politicians avoid discussing bilateral Defense and Security matters or issues touching on forces because it is deemed a Supreme national secret," he said. "Unfortunately, our Somalia politicians have made the politicization of our forces a hobby which is dangerous."

In his address, Dubbe, a close associate of Farmajo, noted that no Somali soldier had fought in Tigray, captured in Tigray, or engaged in fighting in the Holy city of Axum. He added: " Eritrea is training our forces just like our friendly countries who are taking part in rebuilding and strengthening our Somali forces."

Buoyed with reports from the UN special rapporteur, the Somali parliament is almost taking a bipartisan approach to the matter, if efforts by Senator Abshir Ahmed are anything to go by. Ahmed, who had pledged to stand in solidarity with the parents, met other MPs on Monday over the matter.

"As I communicated last week, I am leading a team of Senators and MPs for an open session with parents whose children were sneaked to Eritrea for alleged military training. The session opens now in Mogadishu. I Will update you on the outcome of the meeting," he said in a tweet.

Reports obtained by the United Nations also indicated that the National Defense Committee had asked President Mohamed Abdullahi Farmajo to come up with a task force for the sake of investigating the incident. It's believed that the soldiers will return home after biometric registration.