Twelve killed as army clashes with Islamists in southern Somalia 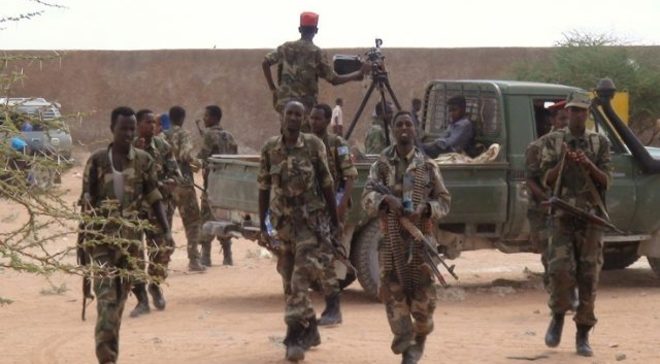 HUDUR, Somalia - At least 8 militants were killed in fighting between the al Qaeda-linked extremists and Somali government forces in the south of the country on Sunday, Garowe Online reports.

Hudur district commissioner, Mohamed Mo'alim Ahmed confirmed that the government forces had lost four soldiers and two others sustained injuries during the armed confrontation between the two sides.

Ahmed has added that more 14 people, including 12 Islamists were wounded, some seriously in the offensive which led to the liberation of the small rural areas around the district from the group.

"The army drove the fighters away from the area around the town during the Intermittent clashes raged on throughout the past 48 hours in the outskirts of Hudur town," he stated.

Somali army, along with African Union (AU) troops have recently ramped up military operations aimed at flushing the extremists out of their remaining pockets in south and central regions.

Last Thursday, nearly ten militants have been killed and several injured during an attack against Al-Shabaab in Jamame town, near the southern port city of Kismayo in Lower Jubba region, 500 kilometers south of the capital, Mogadishu.