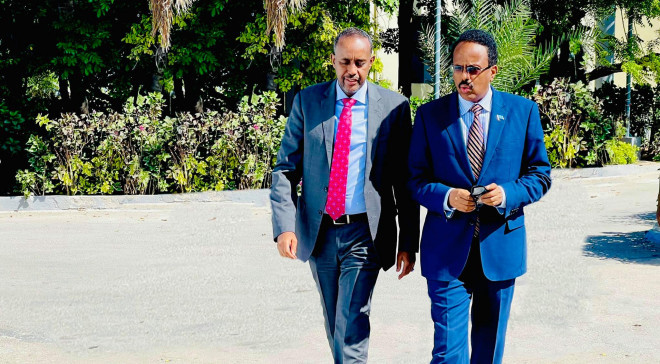 Roble, who took over in October 2020, is scheduled to visit Nairobi on Tuesday just weeks after Somalia restored its relationship with Kenya after months of showdown. Already, the advance team of Roble in Nairobi to prepare for the visit, but sources have confirmed that Farmaajo is against the trip.

On Sunday, Kenya's Foreign Affairs Minister Raychelle Omamo arrived in Mogadishu and she's expected to hold talks with Farmaajo and Roble. But her trip comes just hours after the Somali leader issued a decree the temporarily suspends the signing of international cooperations until elections are concluded.

In Somalia, Omamo is set to focus on pushing for the lifting of the ban imposed on Khat from Kenya, something which Roble was set to discuss once he arrives in Nairobi. Kenya was the main exporter of Khat to Somalia but her fortunes were overturned, forcing Nairobi to also suspend direct flights to Mogadishu.

Details obtained by Garowe Online had established that the ban on Kenya's Khat was imposed to pave way for Farmaajo's family business after they signed a deal with Ethiopia. Ethiopia was given exclusive rights to export Khat to Somalia.

Farmaajo and associates currently control the multi-million dollar khat business now run by the Ethiopians after Villa Somalia mandarins locked out Kenya in March 2020 in the guise of COVID-19 restrictions. Kenya was locked out of the deal.

For months now, Ethiopia has been exporting Khat to Somalia, with Farmaajo's family said to be the main beneficiary. Kenya has been struggling to unlock the ban, at times forced to suspend direct flights to Somalia as a retaliation.

Before Obama's arrival, Kenya had initially sent powerful Interior CS Fred Matiang'i and Chief Administrative Secretary Ababu Namwamba to negotiate over the Khat trade ban. It's not clear if Omamo will succeed in her trip since Somalia is in active agreement with Ethiopia and Farmaajo has since suspended the signing of trade desks.

“Trade agreements with other countries have been suspended during the country’s elections,” the decree released Saturday night read in part, in what could affect efforts by Kenya and to some extent, Roble, in the restoration of the trade ties.

Ambassador Omamo is expected to deliver an invite to Roble today in her visit to Mogadishu. This follows a brief encounter between Roble and President Uhuru Kenyatta June during which time the Kenyan leader extended an invite to the Somali PM.

Despite opposition by Farmaajo in Roble's planned visit to Nairobi, multiple sources have confirmed that the PM will proceed with the trip. Roble, who was recently elevated to take charge of elections, has appeared as a moderate leader who trusts in dialogue, something which may have irked his boss.

The decision by the federal government of Somalia to impose a ban on Kenyan Khat was not only business motivated but also politically engineered due to diverse interests from Farmaajo's family.

While banning Khat which has adverse socio-economic and health consequences effects on many other aspects of life, the government continued to import the Ethiopian Khat, further showing the personal interests.