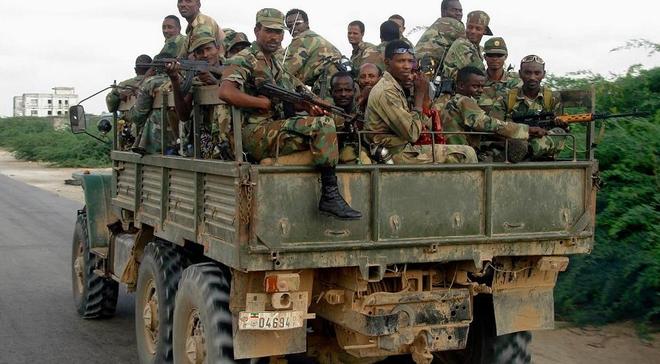 MOGADISHU, Somalia - Al-Shabaab militants unleashed explosives against Ethiopian troops in Gedo region, reports indicate, in yet another fight that erupted in the outskirts of Luuq town on Friday.

The militants targeted a military convoy of Ethiopia National Defense Forces [ENDF] within the vicinity of the town which is located in the Gedo region, triggering a heavy gunfight between the two parties.

Explosives were hurled at the convoy which was patrolling the violent region by the Al-Shabaab, who have lately taken advantage of the squabbles between the Somali National Army [SNA] and regional Jubaland troops, which have also caused tensions within AMISOM.

A source who spoke to Garowe Online in confidence said the militants targeted non-AMISOM Ethiopian troops, whose presence in the region has been a thorn in the flesh between FGS and Jubaland.

He said: "There was a heavy gunfight between Ethiopian troops and Al-Shabaab militants. The fighting has been going on within the vicinity of Luuq town. The troops were heading to the town."

A fortnight ago, a contingent of Ethiopian non-AMISOM troops was seen crossing over to Somalia. The troops set a temporary base at Doolow town also located in Gedo, sources revealed, although their mission was not immediately clear.

Tensions have been building up in Gedo, a region that falls under the jurisdiction of both ENDF and KDF in AMISOM zoning, with the internal politics of Somalia contributing significantly to the predicament.

Casualties from the Friday's onslaught remains fairly unknown with the source adding that "it's difficult to access the battleground. You are not sure where they are and when they will strike".

It's not the first time ENDF troops who are not part of the AU mission are fighting Al-Shabaab within Somalia. In July 2019, the two sides fought also in Luuq town after the militants ambushed the Ethiopian team.

The ENDF had left Yurkud before they were ambushed by the militants. The fierce gunfight left four Ethiopian troops severely wounded. The militants used IED followed by a heavy exchange of gunfire reports indicated.

Previously, there have been allegations by Somalia opposition and Jubaland administration that the FGS has been working closely with SNA with an aim of establishing "parallel administration" in Gedo to undermine regional leader Ahmed Madobe.

ENDF commanders rarely comment on operations in Somalia and attacks by Al-Shabaab, a move that makes it difficult for the media to establish the number of casualties. Al-Shabaab is also yet to issue a statement about Friday's encounter.

Gedo region has been an epicenter of violent confrontations in recent months, which almost threatened gains made in the fight against Al-Shabaab militants, thus forcing America to intervene

But in a swift response, Kenya, which uses Jubaland as a buffer zone in Al-Shabaab war, warned SNA against "violation of territorial integrity" and threatened to take unspecified actions against Somalia.

However, President Uhuru Kenyatta and his counterpart Mohamed Abdullahi Farmajo held a phone call in February and agreed to "work together" for the sake of stabilization of Somalia.

In its submission at the UN security council, the US also warned against the heavy presence of SNA troops in Gedo, arguing that the internal rifts between Mogadishu and Kismayo would pave way for "resurgence" of Al-Shabaab.

Al-Shabaab dominates most parts of Jubaland. For instance in July last year, Jubaland security minister Abdirashid Janan was forced to rush to Gedo, after a host of village administrators were abducted by the militants.

Security forces both in Somalia an AMISOM have borne the brunt of Al-Shabaab attacks. KDF team suffered heavy casualties in 2016 at El-Adde in Gedo, where over 200 soldiers were killed in an army base, authorities in Nairobi said.