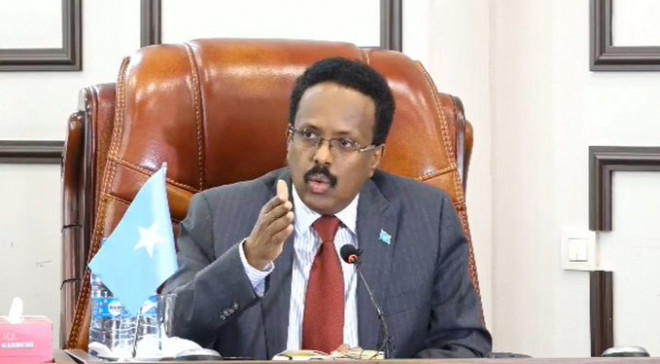 MOGADISHU, Somalia - The outgoing president of Somalia Mohamed Abdullahi Farmajo has delivered a speech at parliament's Lower House Chamber in Mogadishu on Saturday after 3-day talks in Dhusamareb on election dispute failed to yield fruits.

During his address, Farmajo told lawmakers that foreign interference behind the failure of the implementation of the September 17 election agreement without mentioning who was interfering in the poll process.

The president whose mandate expiring on February 8 has called on the Somali parliament to intervene in the standoff and play role in saving the country from a constitutional crisis.

"I hereby declare that we are ready to implement the election agreement, and we ask you to support us in convincing our brothers [Federal States] to be part of the agreement," the president said at parliament.

Farmajo said he compromised five times on electoral disputes during the talks in Dhusamareb with the Federal States' leaders, pointing out that after all efforts did not work, he decided to return to Mogadishu and brief the parliament over the failed meeting.

Continuing, he added that Puntland and Jubbaland refused to implement the election agreement and that the government has repeatedly sent calls and delegations to persuade them to join other regional states in the implementation of the Sep 17 deal.

The remarks at the parliament came after President Mohamed Farmajo and Federal States' leaders from Galmudug, Hirshabelle, Puntland, Jubaland, and southwest states have walked out of the Dhusamareb meeting without resolving the impasse on Friday late night.

Gedo issue was the main obstacle, where Farmajo was reported to refuse to hand over the election for MPs in Garbaharey to Jubaland according to the electoral agreement.