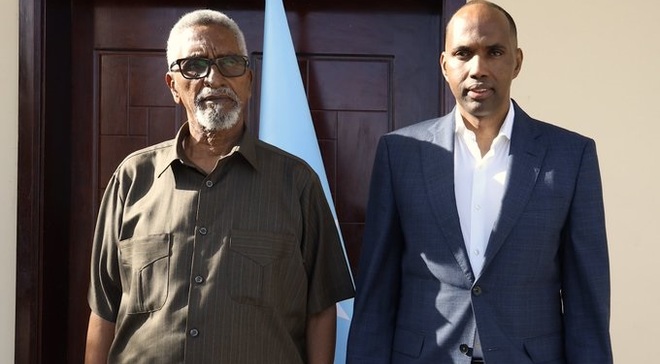 Multiple sources told Garowe Online that the two leaders discussed the transition period being witnessed in Somalia and the journey towards the anticipated new government, which is set to be constituted by 2021 when the country picks a new president through a parliamentary process.

Instructively, the meeting comes just days after Khaire announced his candidature for the upcoming elections, where he insisted that he has "enough experience" to steer the country through to the much-needed stability. The former oil executive said that he's ready to face his opponents.

Khaire was kicked out by the Lower House in July having sharply differed with President Mohamed Abdullahi Farmajo, whom he accused of plotting a term extension. He was a key engine behind the Dhusamareb talks, which brought together the Federal Government of Somalia and member states.

At the time he was silently pushing for timely elections, Khaire got backing from Speaker Abdi Hashi, whose Senate had also called for dialogue to avert possible pre-election conflict. Hashi is also a chief critic of Farmajo and the Lower House, which he accuses of gross violation of the constitution.

But stakeholders inked a deal last week which settled on the model and date for elections, after weeks of negotiations. Under the deal, the country is set to go for elections starting from November and the presidential polls will take place in February after elections of MPs across the states.

Among others, stakeholders agreed to have a Constituency Caucus elections which would see 101 electors participating. This is an improved clan-based model, only that this time, a number of stakeholders will take part in choosing MPs across all the regions.

The National Independent Electoral Commission [NIEC] will not, however, supervise the elections. Instead, organizers called for picking of new regional and national electoral teams which would help organize the elections assigned in the deal.

Khaire joins a race that has attracted Wadajir party leader Abdirahman Abdishakur Warsame and former Presidents Sharif Sheikh Ahmed and Hassan Sheikh Mohamud. However, the two former leaders will settle on one candidate in the Forum for National Parties [FNP].