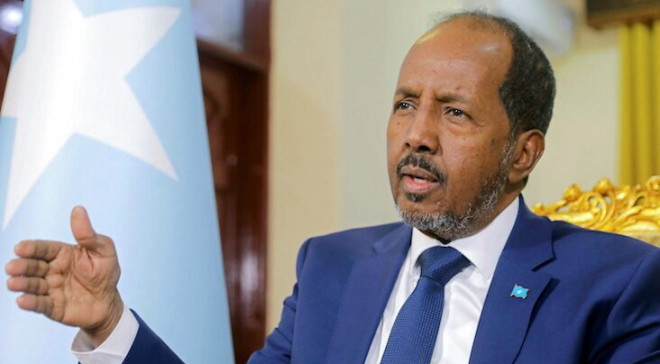 MOGADISHU, Somalia - Somalia is putting progressive mechanisms to block al-Shabaab's financial fortunes, President Hassan Sheikh Mohamud has reiterated, in the wake of the group's insurgency which has triggered civilians to carry arms against the militants.

Al-Shabaab, an Al-Qaida-affiliated group, has been fighting in the country since 2006, with an aim of toppling the fragile UN-backed federal government, but it has often faced resistance from the Somali National Army [SNA], government-allied militia, and the peacekeeping mission teams.

In an interview with the Center for Strategic International Studies [CSIS], Hassan Sheikh, who was re-elected in May after five years in cold, maintained that Somalia is reviewing her fiscal policy, including through the establishment of government agencies that monitor the flow of money.

This move, he noted, will help the government detect money being smuggled into the country to assist the Al-Shabaab, adding that the state has since entrusted the Finance Reporting Center [FRC] with duties to regulate the flow of cash from all financial institutions.

"Al-Shabaab financing is a big issue in Somalia," he said. "We developed Finance Reporting Center [FRC] which is basically a financial intelligence unit. We put the law in place and we are putting more laws which expose the movement of money to the government," added the president.

"These institutions are working with banks, with remittances companies and within where that money is important," Mohamud said, just as he stressed his full-blown strategy to weaken the group, which controls huge swathes of rural central and southern Somalia.

To further transform the transaction process, the president noted, all Somalis will be required to have a Personal Identification Number [PIN] which will be used to identify all individuals to avoid suspicious transactions, a loophole Al-Shabaab militants have been using for over a decade.

"We are now emphasizing the use of PIN which wasn't there before and we are staffing the agency in charge with the help of World Bank," Hassan Sheikh added. "Soon, nobody will be transferring money randomly without a check and they will all be tracked."

Besides suspected financial aid from abroad, the group has been depending on extortion of local businesses in form of taxes, forcing traders to part with huge sums of money to help the group sustain its unscrupulous activities across the Horn of Africa nation.

A report published by the United Nations Special Rapporteur showed that the group runs an annual budget of about $100 million with almost $24 million going to the purchase of weapons. Yemen was identified as the entry route for smuggled weapons to the country.

Hassan Sheikh's sentiments come at the time Somalia National Army and local militia are gaining ground within Galgaduud, Hiiraan, and Bay regions, where the group has been dominant. According to the state media, over 75 Al-Shabaab militants have been killed in the last 24 hours across Somalia.

There are close to 23,000 peacekeepers working with the African Union Transition Mission in Somalia [ATMIS] who have also been instrumental in degrading the militants. The US also dispatched 500 elite soldiers to Somalia to help in training and equipping the local army.