How Farmajo is spending his final days at Villa Somalia 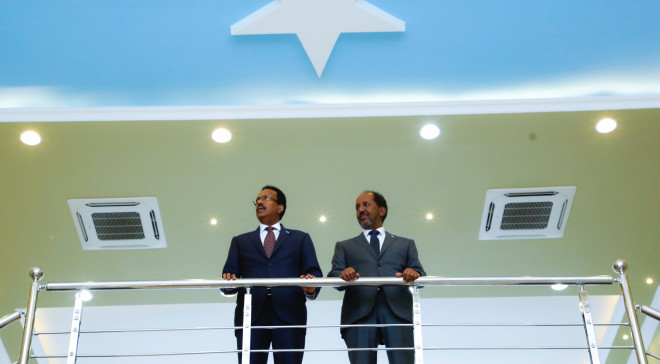 MOGADISHU, Somalia - For the last couple of days, outgoing President Mohamed Abdullahi Farmajo has been preparing to exit Villa Somalia by closely working with members of the transition council, contrary to the expectations of his critics.

Farmajo, who was first elected in 2017, spent five years in Villa Somalia, which were mostly eclipsed by failure to hold timely elections and attempts to extend his term in office. His administration was also put on notice for gross violation of human rights.

But the president, who lost by a huge margin to his predecessor Hassan Sheikh Mohamud, has been coordinating a smooth transition ahead of Monday's official swearing-in of the new president. The event will take place in Mogadishu where a number of regional leaders are expected to attend.

"President Farmaajo and Hassan Mohamud take a tour of Villa Somalia's offices as they continue to spearhead seamless government transition. The Presidents later had broad, constructive discussions on our nation's priority areas of need such as the security and economy," Villa Somalia noted.

"The greatest gift by our Republic to our Citizens is the longstanding history of smooth & successful transition pioneered by our founding fathers. President Farmajo and Sheikh Mohamud have upheld this tradition to take the lead in uniting our nation towards a brighter future."

Multiple sources told Garowe Online that Farmajo, who lost the election on May 15, 2022, is moving to a house near the Jazeera Hotel in Mogadishu. The house called Villa Kaah was occupied by Galmudug President Ahmed Kaliye alias Qoorqoor during the election.

In 2019, Farmajo renounced his American citizenship and has not managed to travel to the US throughout that period. He hands over a fragile economy to a man who worked hard to support federalism which has been under onslaught from Farmajo in the last couple of months.

"The new Somalia President must push Parliament to change the law regarding the powers and role of the Prime Minister before appointing somebody to the office. The PM must firstly be a member of Parliament and secondly serve at the pleasure of appointing authority," opines Farah Maalim, former Kenya's deputy speaker.