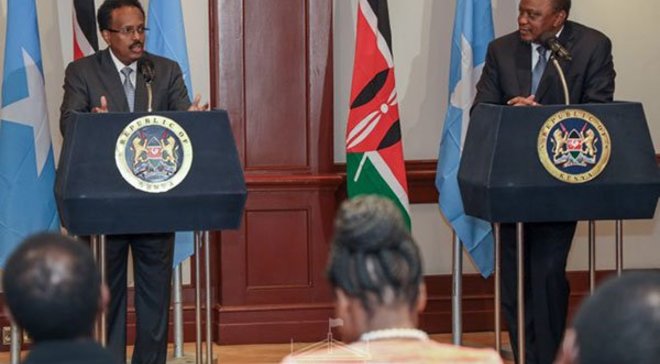 MOGADISHU, Somalia – The international partners of Somalia have on Saturday jointly welcomed the normalization of diplomatic relations between the country and Kenya, Garowe Online reports.

In a statement, the partners described the rapprochement as a “significant step” in strengthening the good ties between the two countries and positively impact security and development in the wider Horn of Africa region.

“We commend the personal efforts of Farmajo and Uhuru and measures agreed at a meeting held in Nairobi on 14 November to improve relations between Kenya and Somalia,” read the statement in part.

After months of standoff, Kenya and Somalia agreed on Thursday to restore diplomatic relations that had deteriorated over the disputed ownership of an Indian Ocean territory thought to be rich in hydrocarbons.

Somalia in 2014 sought arbitration from the UN’s International Court of Justice [ICJ] because the East African neighbors claim ownership of a 150,000 square-kilometer (58,000 square-miles) area off their coastline.