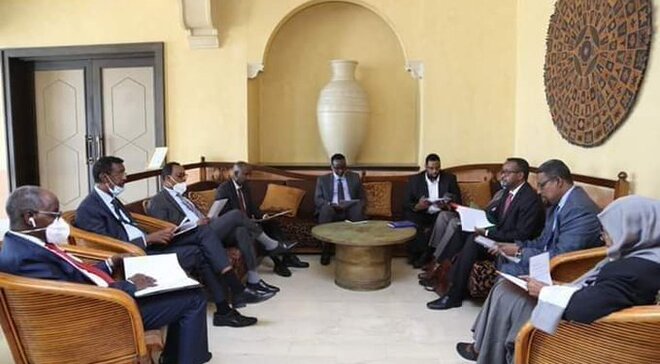 DJIBOUTI - Reconciliation talks between Somalia and secessionist Somaliland have made a major breakthrough after hours of wrangles, Djibouti said in a statement, in yet another dramatic achievement that could enable the two factions to reach a tangible solution.

But the committee struggled to kick-start negotiations due to myriads of unsolved differences, a move that almost collapsed the talks at preliminary stages, leading to tensions among the organizers, who are keen to have the impasse solved.

Mahmoud Ali Youssouf, Djibouti's foreign affairs minister, announced the significant progress in bringing the two parties on board after hours of misunderstanding, adding that "the talks will now start uninterrupted because we've solved the contentious issues".

Some of the issues the technical committee agreed on include code of conduct and guidelines to future talks, confidence building, implementation of past agreements, and formation of three subcommittees which would look at aid, airspace, and security which will meet after 15 days.

Further, Youssouf added, a joint ministerial committee will meet after 45 days where it is anticipated that it will look at the recommendations from the three sub-committees before coming up with a tangible solution that would guide future relations between the two parties.

"We just have to be tolerant of each other. During mediation, differences emerge, parties disagree on certain issues but in the long run, we reach consensus. I want to thank representatives for agreeing to settle on preliminary issues," he said.

Earlier, multiple sources had intimated that the talks were at a "difficult" stage. Some of the issues they strongly contested were the freedom of movement for activists and politicians from either side. The two regions often blame each other of sabotage.

In fact, at some point, Sa'eed sulub, Somaliland's minister for livestock, who is also among those in the committee, told the press that they "walked out" because the talks were "not fruitful". He accused Somalia of being "unprepared" and "politicizing" aid.

During the first meeting on Sunday, the regional leaders agreed that Djibouti will host the technical committee. Further, it was agreed that they should depoliticize investment and development besides implementing initial agreements that were signed in previous meetings.

For over three decades, Somaliland has been running an independent government after seceding from Somalia, but it's yet to get international recognition. But Somalia is keen to have the region integrated with Mogadishu for future relations.

The ties between the two deteriorated in 1991 leading to separation. Somaliland gained independence from the British in June 1960 and agreed to merge with Somalia a few days later after the latter also secured freedom from the Italians.

On Sunday, Muse Bihi Abdi insisted that the only way to resolve the crisis is through recognizing Somaliland's self-determination, in a speech where he also acknowledged the apology offered by Farmajo over atrocities committed in the north by previous regimes.

International partners are keen to see mutual cooperation between the two parties. There are proposals to have Somaliland represented in National Assembly in Mogadishu, but it's unclear of Hargeisa is ready to take the offer or it will focus on pushing for its sovereignty.