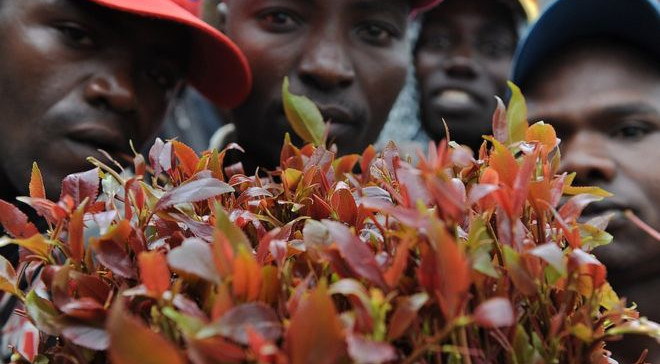 MOGADISHU, Somalia - Kenyan Khat farmers would have to wait for a little longer before starting to export their products to Somalia, the Horn of Africa nation has clarified, just hours after restoring diplomatic relations with the East Africa nation.

For months now, aircrafts carrying the stimulant drug have been banned from Somalia airspace for a couple of months, in what many pundits associated strained relationship between Kenya and Somalia, which the Horn of Africa nation had blamed on "interference with our internal politics".

Somalia restores diplomatic relationship with Kenya early last week in what was mediated move by Qatar Emir Sheikh Tamim bin Hamad, who had dispatched his special envoy Mutlaq Al-Qahtani to both Mogadishu and Nairobi for the reconciliation mission.

Whereas many believed the restoration of diplomatic ties would lead to the lifting of the Miraa ban, Somalia still insists the crop cannot be transported to the country, a move that could further cost the country millions of foreign income from the much-consumed crop.

Ahmed Moalim Hassan, Director General Somalia Civil Aviation Authority [SCAA], said any aircraft which would be found in violation of the orders, will take personal responsibility. According to him, the ban is still active and "nothing has changed".

"Somalia Civil Aviation Authority [SCAA] has the honour to inform all the operators that carrying Mirra to Somalia is still prohibited, and the policy of the federal government of Somalia did not change regarding the transportation of Mirra to Somalia airports," he said.

"Transporting Miraa without clearance from SCAA will be considered an unlawful act and violation of Somalia's airspace. Thus, we would like to advise all operators to not act on transporting Mirra to Somalia until further notice from the authority," the director added.

Kenya is one of the chief exporters of Miraa to Somalia and the farmers from East Africa nation makes millions of dollars annually. President Uhuru Kenyatta had dispatched a delegation led by Interior Cabinet Secretary Dr Fred Matiang'i to Mogadishu over the Miraa ban.

But despite assurances by authorities in Somalia that Khat aircraft are still banned, footage taken at Wilson Airport, Nairobi showed a plane being loaded with the crop, with the destination being Somalia. It's not clear which airport the traders will use.

In honour of Somalia's decision to restore diplomatic relations, Kenya said it will work closely with Mogadishu authorities to ensure "areas of mutual interests like transport are fixed immediately". It has not spoken about the Miraa ban.

Somalia has been having a hot and cold relationship with Kenya in recent months, with the administration of Jubaland being one of the major fallout factors. Nairobi is accused of working closely with Jubaland at the detriment of Mogadishu, a claim which it has persistently denied.