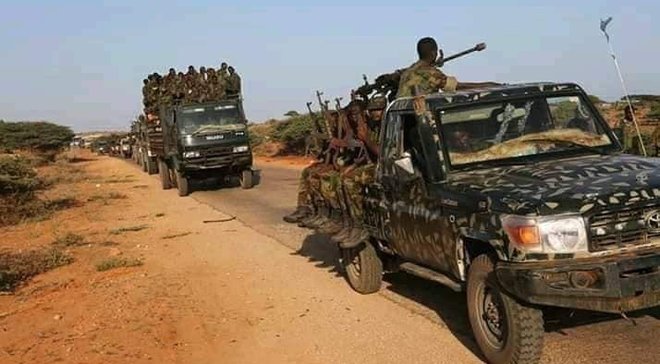 MOGADISHU, Somalia - A platoon of soldiers attached to Jubaland has been dispatched to Balad-Hawo town in Gedo near the Somali-Kenyan border, amid simmering tensions between Mogadishu and Kismayo authorities.

For almost a month, the border town has been eclipsed with tensions due to a heavy presence of SNA - Somali National Army and Jubaland troops, which culminated in heavy clashes on Monday this week.

So intense was the fighting that it spilled to neighboring Kenya, forcing President Uhuru Kenyatta to issue a warning on Wednesday, accusing SNA troops of launching an unwarranted attack on Mandera and warned FGS against "provocation"

But according to Villa Somalia, President Mohamed Abdullahi Farmajo engaged Uhuru in an unprecedented phone call hours later on Wednesday, with both leaders acknowledging the need for calmness in the border and work together on the security.

The two, Villa Somalia said, discussed "ways to jointly work on border security and send committees from both nations to hold talks on strengthening diplomatic relations" including trade ties.

Farmajo and Uhuru, Villa Somalia added, "acknowledged that border security is shared responsibility which revolved around mutual interest" for the benefit of both countries. It's not clear who initiated the phone call.

But on Thursday, a contingent of Jubaland troops approached the battlefield from Mandera route, using El-Wak in the southern region, a move that could spark tensions after three days of calmness.

Photos published by residents showed heavily armed troops believed to be from Jubaland maneuvering along the terrain, all dressed ready to engage their enemies.

"Jubaland security forces moving right inside Mandera town on Bulla Jamhuria Road, near the central chief camp, by the Huduma Center," Ali Roba, the Mandera Governor, said. "This is a major threat to the security of Kenyans in Mandera."

Roba, who has been calling for a truce, said the situation could escalate should the government of Kenya fail to mitigate the standoff, predicting another fierce fight between SNA and JSF.

While noting buildup from both sides, Roba added, "The Government must move with speed to manage the situation to avoid more loss of lives."

Before his phone call with Farmajo, Uhuru had on Wednesday blamed SNA of "flagrant breach and total disregard of international laws" besides accusing the troops of "harassing and destroying" properties of Kenyan citizens in Mandera.

He issued the statement after meeting the National Security Council [NSC] which comprises of the President, his deputy, Defense, Foreign Affairs and Interior ministers, Chief of Defense Forces, Director of the National Intelligence Service and Inspector General of Police.

SNA raids, Uhuru added, "amounts to an unwarranted attack by foreign soldiers with the intention of provoking Kenya". KDF troops, he added, "acted in restraint because Kenya cherishes peace".

Both Kenya and the US have rallied for dialogue between FGS and federal states, whose relationship has diminished in recent weeks, leading to persistent confrontations across the country.

For instance, Jubaland President Ahmed Madobe accuses FGS of "naked aggression" following the Gedo raid. The states accuse Farmajo of a plot to overthrow "his critics" in regional states ahead of December polls.

Rashid Abdi, a security analyst, says the recent deployment of JSF troops to Gedo is "not good optics for Kenya" given that they used Kenya routes, "barely hours after Uhuru, Farmajo call".

To end the impasse, he adds, all parties should "disengage combatants" and workout on a "deal" which should reflect on immediate stabilization of the region.

With the crisis projected to pave way for Al-Shabaab resurgence, Somalia has persistently accused Kenya of interfering with its "domestic affairs", claiming that KDF is "helping JSF" to launch an assault.

KDF works closely with Jubaland in the fight against Al-Shabaab, a move that has often irked Mogadishu, which misinterprets it for "interference" of the country's internal politics.

In a statement issued on Thursday following a five-day meeting in Istanbul, Turkey, the Forum for National Parties [FNP] which brings together 6 political parties in Somalia accused FGS of "misusing" national army by setting it against federal states instead of focusing on Al-Shabaab war